Strange, inexplicable noises in our homes can be eerie, but engineers say they are often linked to how sound travels through a building

They may not look like it in the day, but modern and vibrant Housing Board neighbourhoods are also where things can go bump in the night.

Marbles being dropped or rolled, and furniture dragged - these are some sounds that Serangoon North resident Terence Ng, 28, an associate engineer, hears in the night.

"It is common, yet unexplainable," he said. "The shifting of furniture seems very paranormal to me, but after so long, I am used to it. But still, it's something that I am curious about. To date, there has been no answer for it at all."

While such experiences are not often discussed, the issue surfaced two weeks ago when Speaker of Parliament Tan Chuan-Jin put up a post on his Facebook page about a resident who heard chairs being dragged about in the unit above him. Upon investigation, however, it was found that the unit was empty and the resident who had lived there had died.

Other residents in HDB flats have also heard unexplained sounds, such as knocking on doors, thumping and footsteps pounding in the middle of the night, when no one else should be awake.

Ms Lena Chan, 41, an administrative executive, said she has heard furniture being moved and even people knocking on the door at her flat in Toa Payoh, though no one was there when she went to investigate. "We just live with it, although the knocking can be quite eerie," she said.

Ms Lorraine Guay, 49, a housewife, said she has heard doors slamming and even felt her flat vibrating at Tampines.

"Some neighbours also accused us of slamming the doors every other night, but in fact, we also heard the slamming sounds ourselves."

While sounds that are inexplicable seem eerie, engineers told The Sunday Times there could be some reasonable explanations.

Mr Chong Kee Sen, from The Institution of Engineers, Singapore (IES), said that sounds can amplify or change in tone depending on the medium carrying the sound waves.

"The sound that we hear travelling through the floor slab above us does not necessarily mean that the sound originated from directly above us.

"The sound could have originated from another location and be heard as it travels horizontally or vertically across the floor slab above our heads," he explained.

Mr Crispin Casimir, a chartered building surveyor from building consultant firm CC Building Surveyors, noted: "Such structures (in HDB blocks) are reinforced concrete, which are very effective in allowing the transmission of noise. Sound can also travel via open windows."

"The apartments are built in one structure and therefore sound can travel through the structure from a few units above, below or beside where you are. Airborne sound can be transmitted through windows, doors, openings or circulation space," he said.

Sometimes the sounds heard at night could be due to the expansion or contraction of connected materials.

Said Mr Chong: "For example, if steel or plastic pipes were connected or mounted on the wall or floor, differential movements can produce a noise that could then travel through the floor or wall, which could be heard farther away from the source."

Members of Parliaments of various districts said they get fewer than 10 complaints a year of unexplained noises at night. 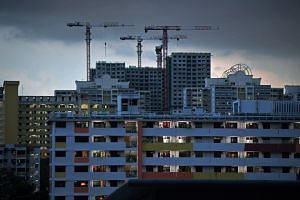 Said Mr Baey Yam Keng, MP of Tampines GRC: "There was one neighbour who complained of others making noise, but we found out that it was a water pipe that shifted slightly when someone turned on the tap. It sounded like furniture shifting. Once the plumber secured the pipe, the noise stopped."

However, other sounds were harder to resolve, he said. Residents are usually unable to record the sound or predict when it will occur. The source of the sound can also be difficult to trace.

Dr Lily Neo, MP for Jalan Besar GRC, said there was a resident who kept hearing the neighbours opening the metal gates of their front door at night, when the unit in question was empty.

"It does have to do with our psycho-emotional state too," she said. "At night, noises seem more acute, especially when you are alone with no other distractions. That's when people concentrate more on their own thinking and perceptions."

Over at Chua Chu Kang GRC, MP Zaqy Mohamad said there was a resident who kept hearing knocking sounds at night, which was really the sound of the lift motor working.

"In the daytime, there is ambient noise, whereas at night, sounds become more noticeable," he said.

But while some sounds are harder to explain away, noise sometimes has a clear cause.

"There have also been disputes between neighbours whereby they complain about children jumping around," said Mr Zaqy.

When it comes to that, he said, tolerance and understanding on all sides is required.

"It's not possible to have a totally quiet environment living in an HDB (flat). It's good to have that foundation of neighbourliness so when someone finds an issue, they can discuss it. It's really down to trust, talking to one another and forming those relationships."

A version of this article appeared in the print edition of The Sunday Times on December 24, 2017, with the headline 'Things that go bump in the night'. Subscribe
Topics:
More
Whatsapp Linkedin FB Messenger Telegram Reddit WeChat Pinterest Print Purchase Article Copy permalink