The main draw of Tengah new town is that its announcement comes amid rejuvenation plans for the west of Singapore, property experts have told The Straits Times.

That, along with the low prices expected for flats there, should offset any inconveniences from the nearby military airbase.

But they also noted that Tengah's relatively remote location in the west could result in lower interest, especially compared with more central estates such as Bidadari.

Plans for Tengah new town were mooted as early as 1991 in a concept plan for Singapore's future. 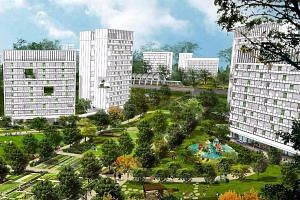 Tengah to be developed into a 'Forest Town'

On Monday, National Development Minister Lawrence Wong revealed in Budget plans that it will be a "Forest Town", integrated with greenery and the Jurong Innovation District, although he did not give a date for when it will be built.

Experts said the latter - a 600ha area bringing together researchers, students and industry - and the slightly farther Jurong Lake District will be key factors in encouraging people to move to Tengah.

OrangeTee research manager Wong Xian Yang said: "The success of these two districts will spur job creation in the vicinity and attract people to live in Tengah."

With Jurong Lake District planned as Singapore's second Central Business District, there could be a spillover effect on Tengah, with high property demand from workers who commute there, according to PropNex Realty chief executive officer Ismail Gafoor.

Although the nearby airbase could mean noise and building height restrictions, experts do not expect it to detract from the area's charm.

Suntec Real Estate Consultants director of research and consultancy Colin Tan said: "Tampines was also affected by the nearby Changi Airport but did it diminish the attractiveness of the town? I would say the infrastructure and amenities are more important.

Yet, it will not be inaccessible. The Jurong Region Line, to be completed by about 2025, will serve Tengah.

Mr Ong expects interest to come mainly from existing residents in the west and north-west, those employed nearby or "prudent home buyers" who prize affordability.

SLP International Property Consultants research head Nicholas Mak thinks it will take time for people to "warm up" to Tengah. "Some might feel they are better off in towns with established amenities."

Chief executive of Century21 Ku Swee Yong agreed: "If I were working in Jurong Innovation District, I'd rather live in Jurong East or Jurong West, where there are already hospitals, polyclinics and schools."