Serangoon, Clementi and Bukit Timah are among the noisiest neighbourhoods in Singapore, one study has found. What does it mean to be living with noise pollution? The Sunday Times finds out.

For the past three decades, Mr K.C. Tang, 72, and his wife have been communicating by shouting at each other.

Even then, the couple can barely make out what each other is saying, due to the unceasing cacophony of horns, sirens and revving engines from the Central Expressway (CTE) around 40m away from their three-room flat at Block 115, Potong Pasir Avenue 1.

Said Mr Tang, a retiree, with a sigh: "We have grown used to this."

Over in Yew Tee and Choa Chu Kang, where MRT tracks are within spitting distance from some Housing Board blocks, residents say that they, too, have become accustomed to living with noise.

Choa Chu Kang resident Nadia Begum, 29, whose home is some 30m away from a stretch of MRT track where a train rattles past every few minutes, said: "Closing all the windows is not sufficient. We have to use pillows over our heads to muffle the noises at night." 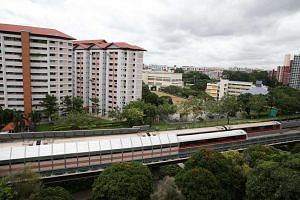 Mr Tang and Ms Begum are among the tens of thousands living next to busy roads, MRT tracks, construction sites and shopping malls around Singapore, who are coping with din just outside their homes.

A new study from the National University of Singapore (NUS) found that Singapore's average outdoor sound level throughout the day is 69.4 decibels, which is equivalent to the noise made by a vacuum cleaner.

This exceeds the National Environmental Agency's recommendation of no more than 67 decibels averaged over an hour, and is a whisker shy of the World Health Organisation threshold of 70 decibels a day. Consistent exposure to that level can cause hearing impairment.

The study also identified the noisiest places in Singapore. Serangoon tops the list of planning zones, with an average of 73.1 decibels from more than 100 noise readings.

Said Ms Diong, 27: "In densely populated Singapore, common amenities like shopping malls, hawker centres and playgrounds all contribute to community noise, on top of that created by traffic."

Noise pollution is inevitable in big bustling cities around the world and Singapore is experiencing it too.

While there are no comparative studies, anecdotally, the city has become noisier over the years as it continues to develop - with more expressways, longer MRT lines and the cycle of construction and demolition playing out over and over again.

This is on top of new trends like the growing popularity of integrated mixed-use developments, with retail spaces, offices, transport hubs and homes in the same complex.

This worries Mr Spencer Tan, 30, of noise monitoring firm Dropnoise. "Even those who live on the higher floors will not be spared since sound travels upwards."

To try to mitigate against noise pollution, the Government has put in place several measures, including tighter enforcement of construction sites and urban planning regulations. Several solutions are still undergoing trials and may be rolled out in the coming years.

But some are concerned that these measures may not be able to keep pace with a growing nation.

Mr Tang's home became noisier when the CTE was widened from a three-lane to a four-lane dual carriageway in 2012 to accommodate more traffic. Said Mr Tang in Mandarin: "We complained then, but nothing much can be done about it since it is impossible to fight progress."

Dropnoise, which produces noise reports for residents and condominium managements, has seen business boom since it started the monitoring service last year.

Mr Tan gets more than three inquiries from frustrated residents to attend to every week. Its reports can be used in court action against noisy neighbours, or submitted to regulatory bodies as proof of noise pollution.

Within Mr Tang's home, for example, Dropnoise, using a sensitive sound meter, recorded an average of 66.6 decibels over a five- minute period.

"This means that the resident is hearing a constant background noise equivalent to a loud conversation. He will have to speak louder if he wants to be heard," said Mr Tan.

Since the problem of noise pollution is here to stay, doctors said residents should be more aware of ways to protect their hearing. These include the use of hearing protection, such as ear plugs and ear muffs, as a temporary solution, said the head of Singapore General Hospital's (SGH's) otolaryngology department, Dr Barrie Tan.

Psychologist Nishta Geetha Thevaraja from the SGH department of psychiatry said personal and work relationships can be affected by irritability and anger issues brought about by noise pollution. Those who have become accustomed to loud noises are "usually unaware of these implicit effects noise pollution has on their lives", she added.

No sound of silence

World Health Organisation guidelines say 70 decibels is the sound level which - if someone is exposed to it consistently for a full day - can lead to hearing impairment. Here's how Singapore and other cities stack up.

The mean noise level is 69.4 decibels, according to an NUS study. It is averaged from more than 18,000 sound readings taken over a 2½-month period.

Noise generally hovers around 70 decibels on the streets of Manhattan, according to measurements taken by magazine NYMag.

A 2009 traffic noise study conducted in Taiwan's Tainan city in 2009 found that 90 per cent of the population was exposed to more than an average of 62 decibels during peak hours.

In one of Asia's busiest financial hubs, 13.6 per cent of the population is exposed to a noise level of above 70 decibels, according to the government's Environmental Protection Department.

The average noise level in Egypt's capital is 90 deci- bels. It hardly falls below 70 decibels, according to a 2007 study by the Egyptian National Research Centre.

Road noise on Shanghai's streets hits an average of 71.9 decibels during the day and drops to 65.9 decibels at night, according to newspaper Shanghai Daily.