The clock is ticking for the last of the Rochor Centre residents.

Just eight days remain for them to move out of the iconic 39-year-old rainbow-coloured blocks.

The deadline given by the Housing Board is Dec 30.

There are some 30 households who are the final holdouts. The other residents in the 567 units have vacated their flats, leaving the estate a veritable ghost town.

A silence lingers in the air. The flats are empty but the common corridors are full of furniture, mattresses and appliances left behind.

But when The Straits Times visited the four blocks on Monday and Tuesday, some residents had yet to leave - and said it would be tough for them to meet the deadline.

They include housewife Nargis Banu, 39, and her family of five.

Key collection for their new flat in a new Build-To-Order (BTO) project at Kallang Trivista in Upper Boon Keng Road began in April, but they collected their keys only on Nov 11. 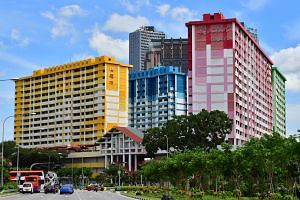 Honey wagons and Little Johor: 5 things to know about Rochor Centre before it's torn down

This was due to her family's delays in securing a $150,000 bank loan for the new flat, said Madam Banu.

Then on Nov 22, an HDB letter came in the mail: "As most of your neighbours have already moved out, for your own safety and security, we urge you to return your flat by Dec 30.

"By returning your flat to us as soon as possible, you will avoid incurring additional expenses in holding on to two flats concurrently."

The Straits Times understands the "additional expenses" refer to the service and conservancy fees that Madam Banu will have to pay for both her Rochor and Kallang homes.

Her husband, who has been in talks with HDB for an extension, said he was verbally given additional time after Dec 30 to move.

Their contractor has been hard at work renovating their Kallang flat, she said. But judging by the state of her new home - the flooring is still not yet finished - meeting the new deadline does not seem likely.

Said Madam Banu, who has lived in their three-room flat for 14 years: "In the first place, we love it here and don't really want to move, but we've already digested that fact and come to terms with it.

"But now with this deadline, it seems like we are being backed into a corner."

In a statement, the HDB said it understands some residents collected their keys to Trivista later due to "individual circumstances, such as outstanding issues on bank loans, family issues etc".

It added: "For those who are unable to move out by the end of the year and requested an extension, we have considered their individual circumstances and will continue to work with them to vacate the unit as soon as possible. For security reasons, we have advised the remaining residents to move out soon."

It was earlier reported that the 39-year-old estate in the Bugis area will be torn down by the year end to make way for the 21.5km North-South Corridor (NSC), which connects towns in the northern region to the city centre.

Yesterday, the HDB said the site will be handed over to the Land Transport Authority (LTA) only "when it is completely vacated".

LTA said previously that it has embarked on a call for tenders for the construction of the NSC. “Major construction works will commence in 2017 after the civil contracts are awarded, and the reconfigured NSC is expected to be completed around 2026,” it said in an April press release.

At Rochor Centre, cleaners sent by the Jalan Besar Town Council are still tidying up the estate, especially at the common bulky refuse disposal point on the fourth floor.

But there is still plenty of trash generated by the mass exodus of residents.

All businesses at the first three storeys, including the FairPrice supermarket, have left.

Corridor lights and lifts still operate though, and homes still have electrical and plumbing services.

Her family collected the key to their BTO flat in September and knew of the urgency to move. But there were just too many things to pack away, she said wistfully.

Her daughter has arranged for the movers to come only on Dec 29, the day before the deadline.

A version of this article appeared in the print edition of The Straits Times on December 22, 2016, with the headline 'Rochor residents in rush to move out'. Subscribe
Topics:
More
Whatsapp Linkedin FB Messenger Telegram Reddit WeChat Pinterest Print Purchase Article Copy permalink