SINGAPORE - Paper wrappers were found stuffed inside a wall at a Woodlands Housing Board block lift landing, raising concerns among some residents.

The man, who did not wish to be named, said that paper was stuffed in a gap between the metal frame of the lift door and the wall in both the 10th and 11th floors of the block in August.

Replying to queries from The Straits Times, HDB said on Monday that it was likely that when the building was first built, the contractor had intended to fill a small gap caused by "localised misalignment between the beam and lift door jamb" to facilitate tiling work.

"Although it does not affect the structure of the building or the operation of the lift, the method used by the building contractor is not an acceptable industry practice," HDB added.

The board said that building contractors are required to adhere to approved drawings and use only approved materials. Contractors found not doing so during checks will be required to rectify the situation.

In a separate incident reported in Chinese-language daily Lianhe Wanbao on Saturday, a woman found cardboard, broken tiles and electrical wiring stuffed into the walls of her Tampines home. 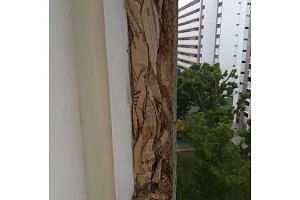 The flat had been undergoing scheduled redevelopment works under the Government's Home Improvement Programme.

HDB told ST on Monday that the board was investigating the issue.

The Shin Min reader said he had e-mailed HDB on the issue at Woodlands, citing fears of a repeat of an earlier August incident in a Tampines HDB block.

For the August Tampines case, ST reported that HDB was investigating a renovation contractor who placed newspapers in the sidewalls of a flat's balcony.

The board said that the flat was structurally sound, and added that it was looking into the incident and would take action against the contractor if found to be errant.