Only 444 private homes were released for sale in April - the lowest so far this year - down 75 per cent from the previous month's 1,812 units, and 33 per cent less than the 664 units launched a year ago, according to data released by the Urban Redevelopment Authority yesterday.

Just three new projects were launched in April compared with 10 in the previous month.

In the absence of major launches, developers' sales dropped about 30 per cent to 735 private homes in April, from the 1,054 units they moved a month ago, but almost the same as the 733 units booked in the same month last year. In all, the three new launches accounted for just 3.8 per cent of the 735 units sold last month, with the bulk of sales coming from earlier launches.

JLL senior director for research and consultancy Ong Teck Hui noted that the "mismatch between the 1,812 private homes launched and the 1,054 units sold in March sent a clear message that there is a lack of demand to absorb so much supply being placed.

"Most of the projects launched in March suffered weak take-up rates. Taking the cue, developers turned cautious and scaled back their launches in April to avoid poor sales progress in their projects. "

More buyers are on the sidelines following two quarters of decline in private home prices and a substantial launch pipeline in the coming months, Mr Ong said.

But other analysts see the glass as half-full. Despite the month-on-month decline in sales, April's figure is still relatively decent, given the far fewer units launched, said Ms Tricia Song, head of research for Singapore, Colliers International. 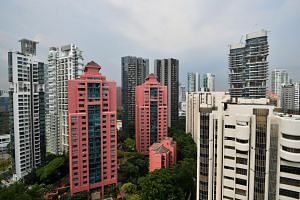 Mr Sim believed that some buyers are won over by competitive pricing amid weakened sentiments, post-cooling measures and a weaker economic outlook.

Mass market launches are propping up sales, with 96.2 per cent of sales coming from previous launches, he said.

Meanwhile, including executive condominiums (ECs), developers sold 744 new units last month, also about 30 per cent less than the 1,062 units in March, and down 44 per cent from the 1,329 units in April last year.

Eight EC units were sold at Rivercove Residences and one unit at Northwave. All eyes will be on the next EC launch in Sumang Walk, in Punggol, which is likely to be launched soon, Mr Sim said.