More than 18,500 lifts within Housing Board (HDB) estates will be modernised with better safety features such as high-tech sensors and emergency communication equipment over the next 10 years.

Of these, around 17,000 are lifts managed by the People's Action Party (PAP) town councils, and 1,500 lifts will be upgraded in the next 15 months, the 15 PAP town councils said in a joint statement.

Works on the remainder will be carried out progressively over the next 10 years.

Around 1,500 lifts within the Workers' Party-run Aljunied-Hougang Town Council (AHTC) will also be upgraded over the next 10 years, an AHTC spokesman said in a separate statement, adding that around 180 are scheduled for upgrading in the next 15 months.

These lifts will be upgraded with modern safety features under the $450 million Lift Enhancement Programme (LEP) funded by the HDB.

The joint statement said the PAP Lift Task Force, which was formed in 2016, had completed its review of the lifts with contractors.

Coordinating MP for PAP town councils, Dr Teo Ho Pin, who led the task force, said the town councils will upgrade only one lift per block at any one time, with each upgrade taking about two weeks. This will minimise inconvenience to residents. 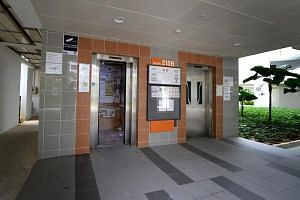 New sensors to be installed in HDB lifts could help prevent incidents: Experts

"The details will be worked out, and residents will be notified in advance of the shutdown," he said.

The PAP town councils managed some 24,000 lifts as of last month, and the WP's AHTC, more than 1,700. The HDB programme will equip lifts with recommended components by the Building and Construction Authority (BCA). The modern features will enhance the lifts' safety and performance, said Dr Teo.

Besides the LEP, the PAP town councils have adopted new working protocols to manage tenders and contractors, and is testing a new system to help town councils manage their lifts.

A lift surveillance system giving round-the-clock information on lift breakdowns is also on schedule to be implemented, said Dr Teo.

The HDB programme extends to lifts that are less than 18 years old at the start of the LEP, which means that older lifts will not qualify for the scheme. These may be considered for replacement under a different scheme, said Dr Teo.

Veteran lift engineer Kok Peng Koon, 80, agreed lifts that are more than three decades old would have suffered so much corrosion and wear that it would be more feasible to replace them entirely than to upgrade them any further.

With a majority now slated for upgrading, experts said this would serve as an incentive for private and commercial lift owners to follow suit and adopt BCA's list of recommended components.

Mr Chee Yan Pong, 73, who owns consulting engineering firm YP Chee and Associates, said commercial parties will have to do so on their own dime.

"Rather than through mandate, this is a softer, more progressive way to teach private lift owners to upgrade their lifts," said Mr Chee.

A version of this article appeared in the print edition of The Straits Times on January 29, 2019, with the headline 'More than 18,500 HDB lifts to be upgraded over 10 years'. Subscribe
Topics:
More
Whatsapp Linkedin FB Messenger Telegram Reddit WeChat Pinterest Print Purchase Article Copy permalink