Right now, they are scattered across three different flats in Punggol. But one family is hoping that the latest Build-To-Order (BTO) flat launch will bring them all under one roof.

Ms Karin Chua, 32, and her 38-year-old husband Tony Lim, who are self-employed drivers, plan to apply for a Three-Generation (3Gen) flat in Punggol, which is around 123 sq m in size and has four bedrooms. They will then move in with their 10-month-old son, Ms Chua's parents and her 80-year-old grandmother. "We thought we might as well all live together. It's easier to take care of each other," said Ms Chua. "My grandfather passed away just a week ago. We want to let my grandmother live with us so she won't feel so lonely."

Punggol is the only non-mature estate in the latest - and largest - batch of BTO flats offered this year. The other estates are Bedok, Bidadari in Toa Payoh and Kallang/ Whampoa.

Among Punggol's 2,000-plus BTO units up for grabs are 65 3Gen flats for multi-generational families at the Waterway Sunrise I project.

While there are no standalone application figures for 3Gen flats, there were 113 applicants going for 398 five-room and 3Gen units in Punggol as of 5pm yesterday. 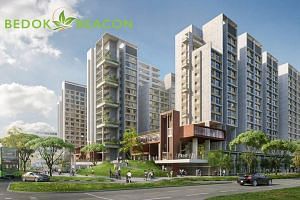 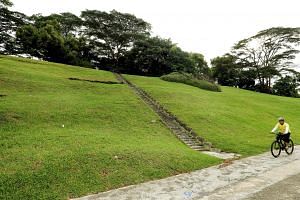 Migratory birds will have hillock refuge in Bidadari estate

But yesterday's star attractions were the four-room flats in the mature estates of Bidadari, Bedok and Kallang/Whampoa.

As of 2pm yesterday, there were already 185 applicants vying for the 158 four-room units in Kallang Residences. This rose to 271 by 5pm.

Four-roomers in Bidadari were also popular, with 481 applicants for 587 units as of 5pm.

The high demand is despite 5,008 flats being offered in a simultaneous Sale of Balance Flats (SBF) exercise. These flats not sold in past exercises are expected to siphon off only a little of the demand for BTO flats, said R'ST Research director Ong Kah Seng. "Not many flat applicants like to place their bets on SBF flats, where there are only a few units available in the location they are keen on."

ERA Realty key executive officer Eugene Lim noted that the projects in the mature estates are close to existing or upcoming MRT stations.

Regarding Kallang Residences, he said: "Demand is expected to be overwhelming due to the city fringe location and proximity to the (Kallang) MRT station. Many applicants will likely try their luck for a unit as the potential for capital appreciation is very high."

Engineer Lee Hwee Liang, 25, and his girlfriend are hoping to secure their first BTO flat - a four-room unit in Bedok.

"It's a nice neighbourhood with good food and lots of shops. Bedok South MRT station is also coming up there, so it will be very convenient to go to town," said Mr Lee.