SINGAPORE - A supermarket, an eating house and shops will be among the facilities built in the new Build-to-Order (BTO) project West Plains @ Bukit Batok.

It was one of three BTO projects launched by the Housing and Development Board (HDB) on Wednesday (Feb 24), which included Alkaff Oasis in Bidadari and Anchorvale Plains in Sengkang.

A total of 1,655 units will be housed in nine residential blocks, which includes an integrated block consisting of rental, two-room Flexi and three-room units.

There will also be an additional rental block with 272 flats. 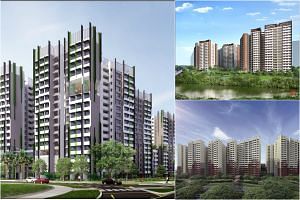 Roof gardens on top of two multi-storey car parks will provide a range of communal spaces.

West Plains @ Bukit Batok has been earmarked for completion by the second quarter of 2020.