SINGAPORE – The new sports hall at Nanyang Technological University (NTU), which is built using eco-friendly material and prefabricated components, could set the pace for the future of construction in Singapore.

The Government aims to quadruple the number of such construction projects that adopt more efficient building methods by 2020.

This is necessary as current methods are not sustainable for the long term, said Minister for National Development Lawrence Wong at the opening of NTU’s new sports hall on Monday (April 24).

Today, the methods used to construct HDB flats and other buildings are labour-intensive. This would lead to a “far larger pool of foreign workers than we can possibly accommodate in Singapore”, said Mr Wong.

“The shortage of workers ends up becoming a bottleneck and a constraint in our development – we end up having to hold back or defer projects,” he added. 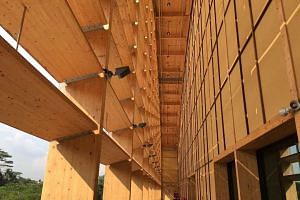 NTU's new sports hall The Wave: 5 things to know about the mass engineered timber used to build it

Currently, about 10 per cent of construction projects adopt new types of technology in the building process.

But if the Government adopts technologies like what NTU has done for its construction projects, “billions more” projects can potentially be carried out with the same number of workers today, he said.

Such new methods allowed construction of the three-storey sports facility, called The Wave, to be sped up while yielding 25 per cent savings in manpower.

The Wave is also the first large-scale building in South-east Asia with a structure built completely using mass-engineered timber.

The material provides five times better heat insulation than concrete. It is also able to support a continuous 72m wave-like roof, without the need for internal columns or pillars.

The Wave at NTU

As a result, the sports hall has a cavernous space that can host three basketball courts or 13 badminton courts.

Other local construction projects that have adopted the mass-engineered timber include the BCA SkyLab Visitor Gallery and Block 81 of the JTC LaunchPad @ one-north, which were both completed last year.