The spate of megacollective sales in recent months - witness the blockbuster deals struck by Amber Park and Normanton Park last week - will surely lead to more home owners trying their luck at getting that pot of gold.

Developers seem willing to oblige as well. They have shown their hunger for land in their willingness to shell out record amounts. The $906.7 million price tag for District 15 condominium Amber Park by a joint venture between units of City Developments and the Hong Leong Group is the highest paid for a freehold site in a collective sale.

Another record fell to Normanton Park near Science Park, which was sold on Thursday to Chinese firm Kingsford Huray Development for $830.1 million.

The winning bid came with an estimated $231.1 million additional payment to top up the lease to 99 years and a differential premium of about $283.4 million to redevelop the site. Add all that up and it translates to a land price of about $969 per sq ft per plot ratio, making it the highest land rate for a 99-year leasehold collective sale site this year.

Size is no longer a deterrent.

Analysts say Normanton Park's sale changes the perception that there may not be appetite among developers for big sites.

The reality is that developers are land-starved. The cutback in the number of sites on the Government Land Sales (GLS) programme in the past few years have prompted them to turn to collective sales to replenish land banks and build their pipeline of projects.

At the same time, they are confident that buyers are starting to return. The private residential property price index for the third quarter this year showed its first rebound in 15 quarters.

These purchases, especially of large sites that come with additional costs like lease top-ups and differential premiums, also reflect a good measure of the confidence that some developers have - that they can finish a new project on the site and sell all of the units within five years from the collective sale order granted by the Strata Titles Boards or the High Court, as part of the conditions for upfront remission of the 15 per cent additional buyer's stamp duty on the land price.

Consultancy JLL said the 17 residential collective sales sealed since January last year could yield an estimated 10,000 to 11,600 new homes. About half of these could be launched for sale next year.

JLL argues that this will be timely as the pipeline supply of unsold, uncompleted private homes had dwindled to 15,085 units as at June 30 - down 29.8 per cent from 21,489 units a year earlier.

These figures from the Urban Redevelopment Authority are for projects with planning approvals.

Small wonder that most analysts see last week's mega deals as fuelling the collective sale fever, with up to 40 more developments said to be trying to jump on the bandwagon. 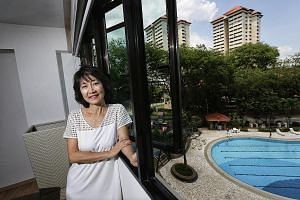 Windfall, but got to move again

Ms Christina Sim, director of capital markets at Cushman & Wakefield, noted that Amber Park "set a new benchmark, especially in the East Coast area, but a few other prime sites may sell for higher (prices) in the coming months".

Developers' hunger for land was also reflected in the recent trigger of the site of former popular nightspot Zouk in Jiak Kim Street.

That, along with the expected launch of condominium projects next year on land sites in Toh Tuck Road and Stirling Road, that set records in terms of the number of bids and prices, will be closely watched barometers for developers' appetite for prime land, said Mr Tan Hong Boon, regional director at JLL.

"If the market reacts strongly to these projects, then the collective sale fever may continue. But if there is lukewarm response, developers will definitely be more cautious in their bidding," said Mr Ismail Gafoor, chief executive of PropNex Realty.

Rising interest rates, prevailing economic conditions and whether the Government will increase supply of GLS sites next year could affect how long the collective sale fever can burn, analysts say.

They also warned sellers against pricing themselves out of the market. "Not all sites are the same, and it will be dangerous to peg the reserve price to the highest transacted psf ppr," said Mr Alex Oh, executive director of Orange Tee Advisory.

Mr Galven Tan, CBRE's director of capital markets, believes "a ballpark premium is about 50 per cent" from the open market value of the collective sale units.

Residential collective sales this year
More deals in the pipeline

A version of this article appeared in the print edition of The Sunday Times on October 08, 2017, with the headline 'Collective sale fever: How much longer will it last?'. Subscribe
Topics:
More
Whatsapp Linkedin FB Messenger Telegram Reddit WeChat Pinterest Print Purchase Article Copy permalink