Residents of the 17 low-rise rental blocks off Old Airport Road must leave by end-2016. Those who choose to buy a new flat anywhere else will get a relocation grant of up to $15,000.

Only about 400 of the 648 units, built by the Singapore Improvement Trust in 1958, are occupied and about two-thirds of the households have at least one member aged 60 and above.

Retiree Lee Choong Hian, 68, who lives alone in a two-room rental flat, will miss the estate where he has lived for 20 years. "The environment is good. At night it's peaceful, and transport is convenient," he said.

Those who want to keep renting will get priority and their rents will not go up. Their options of one- or two-room flats include those in a new block in nearby Cassia Crescent, to be completed in 2016. 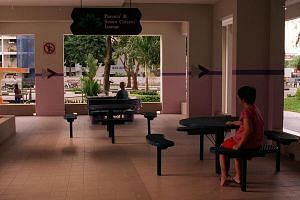 5 things to remember about Dakota Crescent

They can also choose to buy a new flat from the HDB. Eligible first-timers will get a Central Provident Fund relocation grant of $15,000 for families or singles jointly buying a place; lone singles get $7,500.

This grant is being offered for the first time in this relocation exercise. All tenants will also get a moving allowance of $1,000.

The estate was named by experts as a piece of public housing history that should be saved. It was also one of the sites deemed "sacred" by readers in a Straits Times poll.

The HDB said Blocks 13 and 21 "will be retained for interim use, as there is no immediate redevelopment plan".

"Purely from a heritage point of view, I think it certainly has value," said Dr Yeo Kang Shua, conservation architect and Singapore Heritage Society secretary, while agreeing that the state has to balance competing needs.

Even residents who do not welcome the move acknowledge that it has been a long time coming. Mr Yap Boon Hoo, 59, said: "We've lived here so many decades, we knew it was just a matter of time."

The HDB said it would "take cognisance of the social memories of the area when redevelopment takes place in the future".

The estate's landmarks include an old-school playground with a blue mosaic-tiled dove design and a provision shop dating back to 1959, revived as a cafe last month.