Woodlands could get almost 10,000 new dwelling units as part of the Housing Board's Remaking Our Heartland (ROH) programme, which is poised to transform the entire town into a "Star Destination of the North".

The Woodlands Central homes, to be integrated with commercial and community facilities, will be built near Woodlands MRT station. The authorities have yet to decide if these will be public or private units.

Meanwhile, the Woodlands North Coast public housing development will offer residents a "housing- in-the-woods" experience by leveraging on the area's natural hilly terrain so they can enjoy views of Admiralty Park and the Strait of Johor.

The entire makeover of Woodlands - the Republic's northern regional centre - will be implemented within the next five to 10 years. A budget has yet to be finalised. He added: "In Singapore, the Government not only builds HDB flats, but we ensure a quality home and living environment for everyone, and so we invest significant amounts in upgrading programmes... billions of dollars."

The ROH programme aims to spruce up the heartland for Singaporeans. Woodlands is set to undergo the biggest changes as part of the scheme's third batch, which also includes Toa Payoh and Pasir Ris. The HDB listed six "star attractions" to be rolled out in the 1,198ha town. The first involves expanding the Woodlands Regional Centre.

This comprises two parcels of land: retail hub Woodlands Central, a 30ha area around Woodlands MRT station and Causeway Point with a new town plaza; and Woodlands North Coast, a 70ha area between Republic Polytechnic and the Woodlands waterfront.

The second parcel, Woodlands North Coast, is set to house a business park - the first such cluster in the northern region - with land set aside for small and medium-sized enterprises. The facelift for the waterfront also means new trails and a nature promenade for residents. 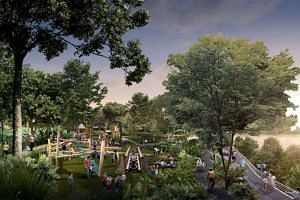 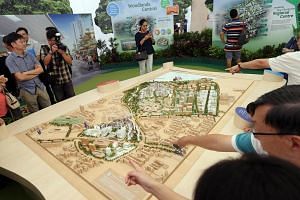 ST Explainer: Sprucing up the heartland

"The Woodlands Regional Centre will be a new hub for businesses, especially those with Malaysian and Asean linkages. This will create many more opportunities and jobs for Singaporeans. It will make Woodlands an attractive place to live, work and play," said Mr Wong.

Other attractions include a new 1.9km community link called WoodsVista Gallery connecting Woodlands Central to the waterfront and the upgrading of the existing Woodlands Town Garden.

A healthcare complex - Woodlands Health Campus - will include a new acute care hospital, community hospital and nursing home. It will be opened in phases from 2022.

Mr Wong called the HDB's makeover and a swathe of projects in the estate "major game changers". The projects include three new MRT stations in Woodlands by 2019 as part of the upcoming Thomson-East Coast Line. The line will be connected to the future cross-border MRT system linking Woodlands to Johor.

The new North-South Expressway, a 21.5km road linking Woodlands to the city, is also likely to be ready in 2026. Last month, the authorities announced a makeover for Woodlands Checkpoint as well.

The HDB engaged 220 residents and community stakeholders in 2015 over seven focus group sessions, in developing these plans for Woodlands.

A spokesman told The Straits Times that the various agencies will work closely with one another to assess if there is any potential environmental impact from the proposed developments and, where necessary, put in place mitigating measures.

Detailed ROH plans for Toa Payoh and Pasir Ris will be announced on April 22 and April 29.

Correction Note: This article has been edited for clarity.

A version of this article appeared in the print edition of The Straits Times on April 17, 2017, with the headline '10,000 new homes could be added in Woodlands revamp'. Subscribe
Topics:
More
Whatsapp Linkedin FB Messenger Telegram Reddit WeChat Pinterest Print Purchase Article Copy permalink