Stalls on second storey sell non-traditional fare; craft fairs and music gigs to be held there

Education coach Yulili has lived in Pasir Ris since 1999, but there has never been a hawker centre in her estate, until yesterday.

Pasir Ris Central Hawker Centre, which officially opened yesterday, is a place that offers traditional and hipster cuisine at affordable prices, as well as a taste of the arts and music.

It has 770 seats with 42 stalls on two floors and overlooks Pasir Ris Park. Twenty stalls on the ground floor sell popular local food, while 22 stalls on the second storey offer dishes such as rice bowls with wagyu beef and Thai boat noodles.

Patrons can also attend events at the hawker centre, such as art markets, craft fairs and music gigs.

A children's area is in the works.

Ms Yulili said: "It's really the ideal place for me. It's not cramped like in a restaurant, and I get to sit next to nature.

"The food is cheap too, even on the second floor."

The hawker centre at 110, Pasir Ris Central, opposite White Sands mall, is managed by NTUC Foodfare - a social enterprise tasked with keeping meals healthy and affordable for Singaporeans.

It is the third one under its wing, after Bukit Panjang and Kampung Admiralty hawker centres.

At least two dishes at every stall are budget meals. Budget meals on the first level cost $2.80, but prices will vary at the hipster stalls.

It's really the ideal place for me. It's not cramped like in a restaurant, and I get to sit next to nature. The food is cheap too, even on the second floor.

PASIR RIS RESIDENT YULILI, who said the neighbourhood has not had a hawker centre since she moved there in 1999. Twenty-two stalls on the second storey offer dishes such as rice bowls with wagyu beef and Thai boat noodles. 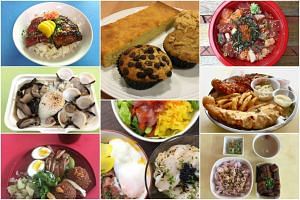 Healthier meals under 500 calories are also available, marked with the Healthier Choice Symbol by the Health Promotion Board.

The hawker centre also features centralised dishwashing and common crockery systems. Diners will also have to clear their own trays.

They can go cashless when paying for their meals by using Plus! cards, Plus! Pay or DBS PayLah! on the NTUC Foodfare mobile app.

By mid-year, diners can order food via the app wherever they are and collect it from the hawker centre, said an NTUC Foodfare spokesman.

The centre was originally scheduled to open late last year, but the installation of the gas supply system took longer than expected.

For aspiring "hipster" hawkers like Ms Cheryl Tan, 24, the centre provides an opportunity in entrepreneurship. She quit her job of more than three years as a pastry chef to set up a stall with two friends from her culinary course at Temasek Polytechnic.

They are part of the "hawker-preneurship" scheme that offers help in the form of funds, branding advice and equipment management training from NTUC Foodfare.

"We graduated and decided to part ways to learn different cuisines, from Thai to French cuisines. Our main goal now... is to take our background in premium food, and translate that into food for the masses," said Ms Tan.

That is good news for residents like Ms Yulili. "I used to cook meals at home, but now I know I have a place to go for good food," she said.