Singapore is a tapestry of languages, each with its own unique syntax, history and ideology. Some are endangered and others are thriving. In the third instalment of a weekly series,we look at Gujarati.

At West Coast Park on Sunday, soaring kites were buoyed by the pounding rhythms of the biggest Indian musical hits.

Friends and family greeted one another: "Kem cho?", or "How are you?" in Gujarati.

About 1,000 members of the Singapore Gujarati community gathered to celebrate the transition from winter to summer, known as Utraan, or more simply as the Gujarati kite-flying festival.

Utraan (also spelt "Uttarayan" in India) fell this year last Saturday, and is one of the largest events in the Gujarati calendar. Its celebration in Singapore underscores the strength here of the Gujarati community - and language.

Singapore Gujarati Society president Tushar Doshi said the community, which he estimated at 7,500, is increasing in size. 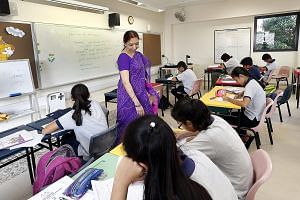 Gujarati: The language spoken by more than 55 million people

He added that the language is inseparably linked with the group's identity so he is not worried about its survival in Singapore. "We identify as Gujaratis, and the basis of that is the language we speak... It is the root of our members."

And this is an Indian language that itself has deep roots in the country's history.

The Gujarati community, traditionally businessmen and traders, built up such a presence here in the late 1800s that an 1886 Straits Settlements bank note from HSBC featured the Gujarati language on it.

But in a place like Singapore where there are multiple cultures, language constantly evolves.

At West Coast Park, senior sales manager Shah Nilesh was busy flying kites with his family and friends, his fingers stained pink by the kite string.

The 46-year-old moved to Singapore from Gujarat 20 years ago and later settled down here with his wife Shah Hemal, a customer service agent. Mrs Hemal, 44, also originally came from Gujarat.

The pair, who are now Singapore citizens, have built a life and home here with their two sons.

Within their household, they mostly speak Gujarati though Mr Nilesh said his sons tend to speak English with each other.

Does this worry him?

"Not really," said Mr Nilesh. With English the dominant language in Singapore, it is only natural for his children to speak it more, he added.

Furthermore, they are comfortable with Gujarati and use it to communicate with their elders.

"As long as they can speak and understand their mother tongue, it... (is) fine for me," he said.

In addition, he believed that as "the world is very competitive", it would only benefit them to understand more than one language.

Still, even if Gujarati is thriving in the community, the picture is different when it comes to its place in the Singapore education system.

Every Saturday morning at Haig Girls' School in Katong, Gujarati students start the day with the Singapore pledge, followed by a secular school prayer.

(O lord we worship you, great is your name. We sing thy glory constantly and achieve success always.)

The Singapore Gujarati School, which teaches Gujarati from kindergarten to A-level standard, is the only local institution that formally teaches the language.

The number of enrolled students has fallen from a high of about 260 around 1997 to about 110 today.

Chief executive Vinayak Dhansukhlal attributed this to several reasons, one of them being the school's location. It has used the facilities of Haig Girls' School since 1994, thanks to a longstanding partnership.

He said parents who live far away may find it inconvenient to take their children there.

Principal Mita Shah noted that lessons being held only on Saturdays presents another stumbling block, as families may not wish to sacrifice their children's weekend time.

She also noted that Gujarati expatriates from India might want their kids to learn Hindi. Hindi, she explained, has a higher international profile as India's national language.

It would therefore be easier for these highly mobile families to ensure consistency in their children's language education if they learnt Hindi, regardless of where they moved to in the world, she added.

Even though Hindi and Gujarati are somewhat mutually intelligible, they are still distinct languages.

"And actually, in India, people make fun of the Gujaratis (for that)!" she said with a laugh.

Ms Mita clearly remembers the passion and excitement in the lead- up to the school's 1994 restructuring, when the community formalised the Gujarati language syllabus.

She recalled that those involved would meet at around 8pm after their full-time jobs until 1am, before returning to work the next day.

They even flew in a Gujarati language expert from London to help ensure the accuracy of the syllabus.

"It was a total community effort with everyone being involved."

If anything, the students' enthusiasm about their classes is testament to the efforts of those who built the school to what it is today.

Palak Chitaliya, 11, enjoys the lessons. "It's really fun because every year they teach us new words (and) new phrases in Gujarati", she said.

She added that the teachers are "really nice".

Said her friend Trisha Parag Desai, 11: "We're all quite close to each other. We've known each other for a long time."

Ms Anjani Singapuri - whose surname acknowledges her family's connection with Singapore - has taught at the Singapore Gujarati School for about 20 years.

When asked why she has remained there for so long, she answered simply.

Ms Mita admits that she is worried about the school's future but is determined to keep it alive.

"We're not making any money from this whole endeavour," she said.

"As long as there are five students, six students (per level), we will definitely run the school because to us that's important."

A version of this article appeared in the print edition of The Straits Times on January 19, 2017, with the headline 'Helping hands to ensure Gujarati fly as high as a kite'. Subscribe
Topics:
More
Whatsapp Linkedin FB Messenger Telegram Reddit WeChat Pinterest Print Purchase Article Copy permalink