New Rainbow Centre campus, which can take in 300 students, will have area for 'authentic learning'

When it opens in 2022, the new Rainbow Centre campus in Admiralty Link will feature an area modelled on real-world environments such as shops and other community spaces.

Dubbed Social Town, this environment in the new campus, which will cater to students with autism, allows for "authentic learning" and helps ease its students' transition after they graduate, said a spokesman for the special needs school.

"We have already been progressively rolling out similar programmes and facilities in our existing campuses," she said.

They include Seeds Cafe at the Rainbow Centre campus in Margaret Drive, which helps prepare students for work opportunities in the food and beverage industry.

When completed, the new campus will be able to serve 300 students with autism aged between seven and 18 .

It will replace an interim campus in Marsiling Lane, where there are currently 65 students.

Rainbow Centre executive director Tan Sze Wee said: "Our third campus will allow us to provide learning opportunities to more students with autism, so that they, too, can be empowered to live independent and fulfilling lives as active members in their communities."

Our third campus will allow us to provide learning opportunities to more students with autism, so that they, too, can be empowered to live independent and fulfilling lives as active members in their communities.

A charity golf event at the Singapore Island Country Club yesterday raised $600,000 for the new campus. The event also saw artwork by four Rainbow Centre students auctioned off for $138,288, which will also go towards the new campus.

One of the artists is 18-year-old Noah Tan, who has been accepted into a visual arts certificate programme offered by the Nanyang Academy of Fine Arts and Very Special Arts Singapore, a non-profit organisation for people with disabilities.

According to the Government's 2016 Enabling Masterplan, which outlined plans to create a more inclusive society for those with disabilities, one in 150 children in Singapore has autism.

While this is higher than the global figure of one in 160 children, experts have attributed this to greater awareness rather than a greater prevalence of autism here. 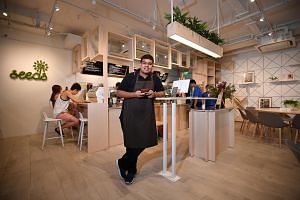 Founded in 1987, the Rainbow Centre currently has 1,400 students and two permanent campuses in Margaret Drive and Yishun Park.

Home Affairs and Law Minister K. Shanmugam, who attended yesterday's event, said it was "heartwarming" to see the level of support from the community being given to the Rainbow Centre's fund-raising.