Young doctors are feeling burnt-out, and this affects their ability to empathise with patients, a local study has found.

Researchers surveyed nearly 500 medical residents across 34 specialities in three public hospitals, eight in 10 of whom said they felt emotionally exhausted, lacking in personal accomplishment, or some degree of depersonalisation. These are generally considered to be the three components of burnout.

On top of that, researchers found that medical residents - who are training to be specialists - in Singapore are more burnt-out than their counterparts in the United States, and have lower levels of empathy.

Previous research has shown that burnout can affect how empathetic doctors feel.

The study was conducted by doctors from the National Heart Centre Singapore, Yong Loo Lin School of Medicine and Duke-NUS Medical School. Researchers used two existing systems developed to measure burnout and empathy, and compared these scores against what has been found among medical residents in the US.

The study was published in the Singapore Medical Journal last month. Its findings are important because patients tend to be more satisfied with doctors who are seen as more empathetic, said Dr Lee Phong Teck, one of the study's authors.

Dr Lee, an associate consultant in the National Heart Centre Singapore's cardiology department, added that burnout can have many causes - ranging from workload to the pressures of medical education to societal expectations of doctors.

The study's authors surmised that given the similarities between residency programmes here and in the US, "local practices and cultural differences" could account for the difference in results, but did not elaborate.

In Singapore, public hospitals typically follow international guidelines on duty hours for doctors. These specify that medical residents should not work more than an average of 80 hours per week, over a four-week period. In addition, they should have at least 10 hours of rest between each shift.

Those in the industry say that young doctors can find it hard to cope with how their demanding work schedules impact their personal lives.

Doctors often have unpredictable work schedules and may be required to juggle emergency cases in addition to their normal workload, said Ms K. Thanaletchimi, president of the Healthcare Services Employees' Union.

"On top of that, doctors need to keep abreast of the latest in the medical field, do research, and so on," she added. "It is time to review doctors' workload, since we have already reviewed their remuneration."

The Health Ministry has increased pay for public-sector doctors twice in recent years - first in 2012, and again in 2014.

These specify that medical residents should not work more than an average of 80 hours per week, over a four-week period. In addition, they should have at least 10 hours of rest between each shift. 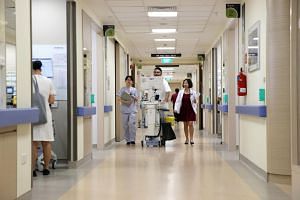 Young docs urged to veer away from specialising

Many hospitals also have programmes to help young doctors cope with work stress.

For example, the National University Hospital set up a sub-committee last year to help spot young doctors who may be experiencing burnout and refer them to professionals for help if needed.

At SingHealth, there is a mentorship programme where residents are given support from their more senior colleagues.

This can range from imparting medical knowledge to helping them with the more personal aspects of the job, said Associate Professor Yeo Khung Keong, who is a mentor.

"When you give so much of yourself, it feels terrible when things don't go well," he said. "Mentorship can involve helping a trainee with that."

He is currently mentoring Dr Jonathan Yap, an associate consultant in the same department.

"There is work, exams and the social side of things... Striking a good balance between all three can be difficult, and that is where the mentor comes in," said Dr Yap.