Men added 5.5 healthy years to their lives, while it was 4.9 years more for women

Women here are living longer but lagging behind men when it comes to adding extra healthy years to their lives.

According to the Global Burden of Disease 2015 published in The Lancet last year, women spend the last nine years of their lives in ill health, and men 7.5 years.

Some of the factors that create the years of ill health towards the end of life can be prevented, said Dr Amy Khor, Senior Minister of State for Health. In an interview with The Straits Times, she said it is good that Singaporeans are living longer, but not if those added years are lived in pain and suffering.

In 2015, life expectancy for women here was 84.9 years and for men, 80.4 years, making people here among the longest-living in the world. But women spend 10.7 per cent of their lives in ill health, and men 9.4 per cent. In fact, men here top the world in terms of the number of healthy years they live, according to The Lancet report. 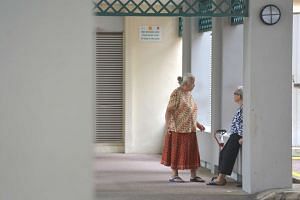 Dr Khor said: "It is really important to tell women, 'Yes, you have got longer lives, but we want you to change your lifestyle to increase your years in good health'."

She chairs the Women's Health Committee, set up in 2012 to focus on problems faced by women to help them reduce the burden of ill health. Under its current three- year road map, which started in 2015, the committee is focusing on three big culprits: osteoporosis, diabetes and cancer.

Osteoporosis, a disease in which bones become so brittle that they break easily, is a major cause of poor quality of life for some women, said Dr Khor. Women experience a rapid loss of bone mass in the years following menopause, unless they work at retaining bone density.

She said: "I see women in their 50s in the community with knee guards, complaining about pain. It (osteoporosis) is part of ageing, but we can delay it."

For diabetes, the focus of the committee is on gestational diabetes mellitus (GDM) - which affects one in five pregnant women here - since it puts both the mother and baby at risk of diabetes in future.

The committee wants such pregnant women to control the GDM and change their lifestyle after giving birth to prevent the diabetes from recurring. For women with obesity, a major risk factor for diabetes, it is getting them to eat better and exercise more.

With cancer, the aim is to encourage women to have screening for breast, cervical and colorectal cancers, which are preventable or very treatable. The committee is working with the Breast Cancer Foundation (BCF) to provide funding for lower-income women to get mammograms. BCF agreed to fund screening of 40,000 women over five years from end-2014.

Dr Khor said getting women to be healthier has spillover effects, because they have influence over three generations - their parents, spouses and children.