It all started with a filler injection in September last year that was meant to raise her nose bridge.

But the seemingly simple procedure, done by a beautician, went wrong almost immediately.

Within two days, the skin on her nose turned completely black.

To this day, the 58-year-old divorcee is still undergoing treatment, even after spending most of the past year trying to rebuild her nose.

Jenny (not her real name) will always regret her decision to allow a medically untrained person to inject an unknown substance into her face. 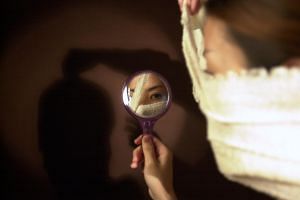 It was not something she normally did. She used to go to doctors for aesthetic treatments.

But when her business failed, she could no longer afford to go to the doctor for treatments regularly.

She became a beauty consultant, selling beauty products. One day, a friend told her about someone who could do filler injections.

"I followed my friend to her shop just to have a look," said Jenny.

Initially, she did not plan to have anything done. But the beautician told her that her nose bridge needed to be enhanced and that she could pay for the treatment in instalments.

The first injection, using a filler called Natural Face, disappeared after a week.

The second injection, using the same product, was done with a "very long" needle, she said. No anaesthesia was given.

"When she pushed the needle in, it was quite painful and I told her to stop," said Jenny. But by then, the beautician had finished the injection.

That was around 5pm on Sunday. Three hours later, at around 8pm, she felt the skin on her forehead pulling upwards. It was slightly painful and her face was also red.

The next day, Jenny went to a general practitioner and was given some antibiotics and an antiseptic wash for her nose.

By Tuesday, she knew it was a big problem.

"The colour was not just on the skin, like a normal bruise, but also deep below it," she said.

That was when she went back to her long-time plastic surgeon, Dr Leslie Kuek, for help.

The skin of her nose had turned gangrenous.

"There was no manufacturer's information, no serial or product number, no content information and no date of expiry. It was a counterfeit product which she thought looked authentic," said Dr Kuek, who runs a practice at Mount Elizabeth Novena Specialist Centre.

It was probably the combination of the use of a counterfeit product and the beautician's lack of skill that caused the vessels providing blood to the skin of the nose to become clogged.

"I was shocked that such a thing could still happen in Singapore. The skin and soft tissue had died, leaving her with only the deep cartilage structure," said Dr Kuek, who has been in practice for more than 20 years.

He cut away and removed all the dead tissue, leaving a large gaping hole.

Then came the difficult part of reconstructing her nose. He used skin and cartilage grafts and fat from other parts of her body to build up the volume and surface of the nose.

She now has a reconstructed nose but it is "not yet perfect", said Dr Kuek, who is still treating her.

Disfigurement aside, she now suffers from a constantly dripping nose and frequent headaches, as well as depression.

Jenny has spent about $40,000 so far on her nose reconstruction.

The beautician has stopped doing procedures on others, she said.

"She has also given me some compensation to seek treatment. If she stops helping me, I may think about suing her," she said.

Dr Kuek said that people should understand that when things go wrong, it may not be that easy to fix.

A supposedly cheaper way to plump up her lips made them lumpy instead, and she ended up having to go for surgery.

In 2006, April (not her real name) followed a friend to see a beautician.

Her friend told her the beautician was from Malaysia, but would come to Singapore to perform filler injections, which she opted for to plump up her lips.

"She was told the beautician had trained in Japan and was very good," said Dr Tan Ying Chien, a consultant plastic surgeon at The Sloane Clinic Plastic Surgery Centre at Novena Medical Centre, who treated April after the treatment went awry.

At first, April spent $800 on the procedure but was not satisfied as her lips were not symmetrical.

Then her lips swelled up. When she went back to the beautician, she was charged another $100.

"The person just used a syringe and tried to draw something out of her lips. She stopped when she drew blood," said Dr Tan, who recounted April's tale to Mind Your Body.

Her lips remained lumpy and out of shape.

Last year, she went to Dr Tan for help. He did a lip reduction surgery on her and removed the filler.

"Whatever that was injected into her lips had become localised in lumps. I had to remove the lumps and reshape her lips," said Dr Tan.

"If she had come to me for fillers in the first place, it would have cost $1,000, almost the same as the beautician's fee," he said.