The Singapore Dental Council (SDC), the dental professional watchdog, has been having trouble ensuring that dentists here under conditional registration are supervised properly.

This was announced in a circular in January, which said the change is being made "in view of the increasing number of complaints received and non-compliance relating to the supervision of dentists under conditional registration".

Dentists working here under conditional registration are mostly graduates from an approved foreign university. They are usually required to work for two years under supervision before they can apply for full registration.

The SDC's latest annual report, for 2015, said there were 297 conditionally registered dentists here, out of a total of 2,060 - or roughly 15 per cent of all dentists.

Of the newly registered dentists that year, 48 graduated from the National University of Singapore, while 169 were foreign-trained. 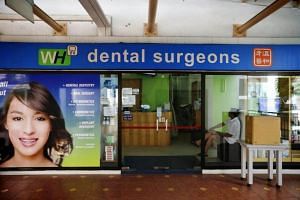 Dentist on suspension gets another ban for misconduct

The vast majority of dentists under conditional registration work in the private sector.

Of the 84 complaints the SDC received in 2015, six were about oral health therapists, conditional dentists and supervisors.