While conversations about death and dying may be difficult or culturally taboo, it is important to have them.

These conversations can help caregivers understand their patients' desires for the last days of their lives, said President Halimah Yacob on the sidelines of a visit to Dover Park Hospice in Novena yesterday.

"People prefer to be among their loved ones. Only when that is not possible do they come to in-patient services like Dover Park Hospice," Madam Halimah said after a tour of the facilities, where she met employees and several terminally ill residents with their family members.

The visit was part of her community engagement efforts with elderly people.

Dover Park Hospice offers both in-patient and home-based hospice care services, and has served more than 12,000 patients and their families since it opened in 1992.

It is Singapore's first purpose-built hospice and a beneficiary of the President's Challenge, an annual community outreach and fund-raising campaign.

Madam Halimah noted the positive feedback she had received from residents and their families of the hospice's services and staff.

"It is important to ensure that we continue to give strong support for affordable, accessible and good quality palliative care so that people can die in dignity," she said.

In the hospice, everyone is sick, so we can talk about anything. When talking to family, we don't want them to worry, so there are things we wouldn't talk to them about.

MADAM MARY TANG, who has been at Dover Park Hospice for three months.

During the visit, Madam Halimah met Madam Mary Tang, a cancer patient who has been a resident at Dover Park Hospice for three months.

The 62-year-old showed Madam Halimah a photo album, which included photographs of her recent visit to Gardens By the Bay.

She said residents would go on short trips with volunteers every Thursday, if their doctors deemed them well enough, and added that the recent trip was one she needed. 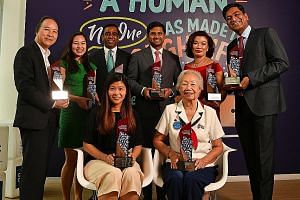 When her mother, who was in her 90s, died in Sengkang General Hospital early last month, Madam Tang was so distraught that she did not go out for three weeks.

With the support of hospice staff and volunteers, and through conversations with fellow residents, Madam Tang was able to come to terms with her mother's death.

"We have to make use of the time we have. In the hospice, everyone is sick, so we can talk about anything," she said in Mandarin, dabbing away tears. "When talking to family, we don't want them to worry, so there are things we wouldn't talk to them about."