Fat molecules are mostly made of hydrogen and carbon.

In saturated fats, each of the carbon atoms is connected to the maximum of two hydrogen atoms, meaning the molecule is "saturated" with hydrogen atoms.

This results in straight fatty acid chains that can be packed closely together, allowing the fat to be solid at room temperature.

The double bond creates a "kink" in the fatty acid chain, which prevents them from being packed closely together, which is why plant oils are liquid at room temperature.

Some unsaturated fats like omega-3 fatty acids are found in fish like salmon and mackerel, and are considered essential as the body does not produce them on its own. They can help protect against heart disease and stroke.

Most unsaturated fats are cis fats, meaning the hydrogen atoms attached to the double-bonded carbon atoms are on the same side. This is what creates the kink in the fatty acid chain.

In trans fats, the hydrogen atoms are on opposite sides. This means there is no kink, allowing the trans fat to be solid or semi-solid at room temperature.

A small amount of trans fat can be found in meat and dairy products, but trans fat consumption worldwide increased mainly because of the introduction of partially hydrogenated oils (PHOs) into the food supply, said adjunct associate professor Tan Ru San, a senior cardiologist at the National Heart Centre Singapore.

This is due to the scarcity of traditional solid animal fats such as butter, lard and tallow, as well as the perceived harm of saturated fats, he added.

In the early 20th century, food chemists invented hydrogenation, an industrial process that adds hydrogen to vegetable oil in order to harden it by converting it into saturated fat.

When the oil is fully hydrogenated, it is fully converted into a saturated fat and contains very low amounts of trans fat, said Prof Tan. 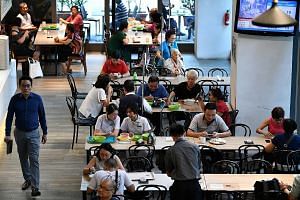 From whole grains to less sugar, Singaporeans are eating healthier

When what you eat is a fat lot of good

But when the oil is only partially hydrogenated, not all the molecules become saturated fats. A significant amount gets converted into trans fat.

Partial hydrogenation results in a product that is semi solid.

This makes PHOs useful for manufacturers as they are easy to use as an ingredient and result in products that have greater shelf stability.

They are also cheap substitutes for animal fats.

Manufacturers in Singapore and overseas have already begun replacing PHOs in their products.

Some blend liquid oils together with saturated fats or fully hydrogenated oils to reproduce the semi-solid property of PHOs without creating the high levels of trans fat.

Oils that are high in saturated fats, like palm oil and kernel oil, are a good substitute. While not necessarily healthy per se, they are still much healthier than PHOs.

Another industrial process, known as interesterification, which has been used in the edible oils industry for decades, can also convert liquid oils into solids without producing trans fat. Prof Tan said there are as yet no regulations on interesterified fat as its health impact has not been thoroughly studied.

A version of this article appeared in the print edition of The Sunday Times on June 16, 2019, with the headline 'The skinny on the fats we eat'. Subscribe
Topics:
More
Whatsapp Linkedin FB Messenger Telegram Reddit WeChat Pinterest Print Purchase Article Copy permalink