Even as primary schools are doubling down to fight diabetes following a Health Promotion Board (HPB) initiative launched this year to, among other things, sell less sugary drinks, one school has already been waging the war against sugar for years.

Enter Riverside Primary School in Woodlands Crescent - since the school started in 2013, it has never had a drinks stall.

Said the school's principal, Mrs Sharon Siew: "We have always advocated the drinking of plain water and for everyone to bring their water bottles every day, and to refill them at the water coolers all around the school.

"Consuming too many sugary drinks may also spoil the children's appetite. We have to start at a young age so that it becomes part of our lifestyle."

Parents and students are supporting the move, with some even posting positive messages on the school's Facebook page.

Madam Wendy Yeo, whose daughter Eunice Yong is a Primary 4 pupil at the school, said she encourages Eunice to drink water.

The 49-year-old said: "Parents were told of the move to do without a drinks stall and all of us have been very supportive."

Eunice added: "If we drink too many sugary drinks when we are young, we might develop many health complications when we are older and it would be difficult to turn back."

Kirtana Sureshkumar, 11, also a pupil at the school, said: "Sometimes I may feel a bit jealous, especially when I hear from my friends that they have a drinks stall in their schools. But upon deeper thought, I know our school adopts a healthier lifestyle and too many sugary drinks is not good."

The Primary 5 pupil added: "It is definitely better to not have a drinks stall."

There are no vending machines selling sugary drinks. Pupils who forget to bring their water bottles can pick up bottles of mineral water at the school's general office.

Teachers and staff alike are also strongly encouraged to stick to drinking water.

Still, parents are allowed to pack drinks such as Milo for their children to take to school. 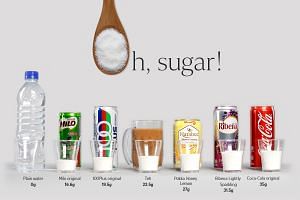 Other primary schools have also been taking steps to cut down on sugary drinks, although not quite to the extent of Riverside Primary.

The 69 other schools that The Straits Times spoke to said they have been following HPB's Healthy Meals in Schools Programme, which encourages schools to sell drinks with less sugar.

For instance, carbonated drinks should not contain more than 7g of sugar per 100ml.

HPB conducts assessments at schools twice a year to look for areas they can improve in when it comes to offering healthier meals.

This year, Xishan Primary, in Yishun Street 21, decided to stop the sale of carbonated drinks.

Currently, packet drinks, milk, fruits and jelly are sold at the drinks stall. The school has also pulled the plug on the vending machine which used to dispense carbonated drinks.

Mr Roland Neo, Xishan Primary's physical education and co-curricular activities head, said of the school's move: "It is definitely healthier for the children. A lot of students used to buy carbonated drinks in the past.

"Bottled drinks are also no longer sold as their volume is greater and children will finish the whole bottle within a short time. The (drinks) vendor was given time to finish her stock."

More recently, Ai Tong School, located in Bishan, said it has stopped the sale of sugary bottled drinks to pupils from the third quarter of this year.

"This is an in-school initiative in line with the Healthy Meals in Schools Programme by HPB," said a school spokesman.

A version of this article appeared in the print edition of The Straits Times on November 17, 2017, with the headline 'Sweet drinks off the menu at primary schools'. Subscribe
Topics:
More
Whatsapp Linkedin FB Messenger Telegram Reddit WeChat Pinterest Print Purchase Article Copy permalink