Findings could lead to development of new pharmaceutical drugs in future: Researcher

Some plants commonly found in nature reserves and community gardens in Singapore could one day be made into pharmaceutical drugs for treating cancer.

A study by researchers from the National University of Singapore (NUS) found that leaf extracts taken from medicinal herbs used in South-east Asian folk medicine were effective in stopping the growth of seven types of cancer.

Associate Professor Koh Hwee Ling of the NUS Faculty of Science's Department of Pharmacy, who led the study, said: "Although Western medicine is the primary form of healthcare in Singapore, there are still people using fresh medicinal plants for their healthcare needs, sometimes together with Western medicine," she said.

For a previous study published in 2014, also led by Prof Koh, the team conducted face-to-face interviews with 200 local users of fresh medicinal plants between 2010 and 2013.

A total of 104 plant species were documented, along with the participants' usage patterns, dosages, reasons for and methods of use.

For the new study, the team focused on seven plants commonly believed to be effective in treating or preventing cancer. Leaf extracts from the plants were obtained using different solvents and extraction methods. The samples were tested for 48 hours on 12 cell lines - colonies of cells with the same genetic make-up - from seven types of cancer: breast, cervical, colon, liver, ovarian and uterine cancers, and leukaemia. 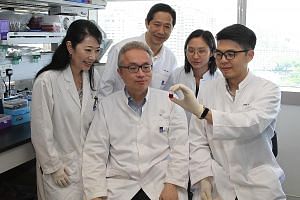 Green tea as a transporter of anti-cancer drugs

The most promising results came from a plant called Leea indica, also known as bandicoot berry or memali. It was found to have strong or moderately strong effects on all the cell lines except for the leukaemic cells, on which the effects were more varied.

Surprisingly, the most popular plant among users interviewed, Clinacanthus nutans, was found to be the least effective, Prof Koh (Hwee Ling) said. Better known as Sabah snake grass, it was found to have weak effects or no effect in almost all the cell lines.

Surprisingly, the most popular plant among users interviewed, Clinacanthus nutans, was found to be the least effective, Prof Koh said.

Better known as Sabah snake grass, it was found to have weak effects or no effect in almost all the cell lines even though it was frequently reported to be used by cancer patients in the region.

Many users told the researchers that they had heard about its anti-cancer properties from friends or read about it online.

Prof Koh said: "One possibility could be that it may be helping cancer patients in other ways, rather than killing the cancer cells directly. Some also use it for general health purposes."

She added that the findings provide some scientific backing for the use of medicinal plants in regional folk medicine and could lead to the development of new pharmaceutical drugs in the future.

While some of the plants documented in the survey are used in traditional Chinese medicine, which has its own body of research, others were used by native peoples and the knowledge was passed down verbally from older generations.

Dr Siew Yin Yin, the first author of the study, said: "There is a pressing need to document and investigate how indigenous medicinal plants were used before the knowledge is lost."

More research is still needed to identify the active compounds in the plants before a drug can be developed, said Prof Koh. "Those interested in using these plants should consult qualified medical practitioners and healthcare professionals rather than self-medicating."

Medicines in the garden