Groups of up to 5 can gather; other activities such as dining in may be allowed from June 21

Singapore will relax restrictions on social gatherings in a two-step process from Monday, when people will once again be allowed to gather in groups of up to five.

If all goes well, higher-risk activities such as dining in at food and beverage outlets may be allowed a week later, from June 21.

But working from home will remain the default for the entire period to reduce interaction in public areas and footfall on public transport, the Ministry of Health (MOH) said yesterday.

Urging vigilance as Singapore opens up, Trade and Industry Minister Gan Kim Yong, who co-chairs the task force handling the pandemic, said: "We may continue to see a few cases every day, but that is the nature of the virus." The aim is to keep overall numbers low and avoid large clusters, he added.

In the first step of Singapore's staggered reopening, operating capacity limits for attractions, cruises, museums and public libraries will go up from 25 per cent to 50 per cent. Size limits for events such as movie screenings and wedding solemnisations will also be increased, although pre-event testing must be in place for gatherings of more than 50 people.

When dining in is permitted, the authorities will be "significantly stepping up enforcement and will take firmer enforcement action for any breaches", MOH said.

Other activities such as wedding receptions and the playing of wind instruments at live performances will also be permitted, while gyms and fitness studios will be allowed to resume mask-off activities.

The number of new Covid-19 cases reported daily has fallen since tightened measures were put in place on May 16, when Singapore saw 38 community cases. This number has remained in the single digits since June 6, with most linked to other cases, Health Minister Ong Ye Kung noted yesterday.

The seven-day moving average of new cases stood at 11.9 on Wednesday, down from 22.6 at the peak of the outbreak.

Mr Ong highlighted how this wave of transmission was controlled without a circuit breaker (CB) using methods such as extensive contact tracing, testing, vaccination, and localised lockdowns of malls and schools.

"That means if there are any future outbreaks, we can use all these methods to control and break the chain of transmission, as opposed to a very blanket approach and a very painful CB," he said. 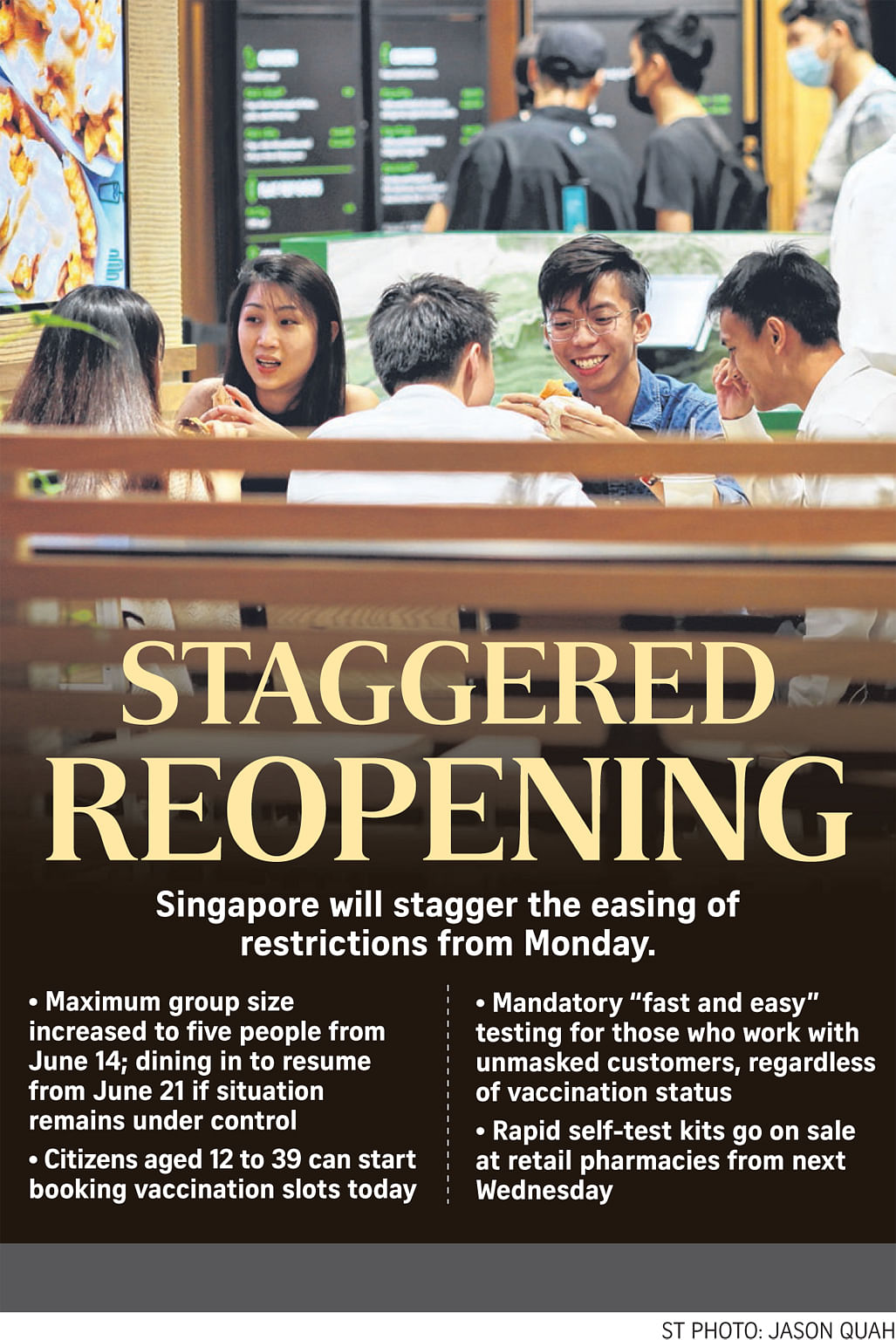 But the minister also warned against complacency, given how transmissible the Delta variant first discovered in India is.

Singapore will need to see the seven-day rolling average dip further. It will also have to monitor the situation for 14 days - or one incubation cycle of the virus - starting from June 6 before it can be assured that most "embers of this virus... have been put out". June 6 is when Singapore first started seeing low daily community case numbers.

Mr Ong also announced that Singapore citizens aged 12 to 39 will be able to book their vaccination appointments from today. They will be given a two-week priority window in which to do so.

As at Wednesday, more than 2.5 million people - around 44 per cent of Singapore's population - had gotten at least one dose of a Covid-19 jab. Around 49,000 doses are administered daily, with more than 4.4 million doses given overall.

Mr Ong noted that since April 11, around 9 per cent of unvaccinated people who contracted Covid-19 developed severe symptoms, compared with less than 1 per cent of those who were fully vaccinated.

He added that coronavirus self-test kits will soon be available for sale at selected retail pharmacies. They deliver results in less than 20 minutes and are simple to use, he said.