From Sept 1, those aged 40 and older can get tested for common conditions for $5 at most

In a move to detect medical problems early - and prevent bills from spiralling out of control later - the Government is launching a highly subsidised national health screening programme to test for up to five common conditions.

The effort is part of the larger narrative to raise health levels of Singaporeans through early intervention and healthier lifestyle choices - while keeping costs in check.

Sharing the initiatives that his ministry was putting in place, Health Minister Gan Kim Yong said in Parliament yesterday: "They will lead us towards good, affordable and sustainable healthcare in the long term."

One key move involves early detection of the major health problems that afflict Singaporeans. From Sept 1, all Singaporeans aged 40 and above can get tested for diabetes, cholesterol, blood pressure and cervical cancer, for $5 at most, at the 950 Community Health Assist Scheme (Chas) clinics across the island. Those older than 50 can also get tested for colorectal cancer at no extra cost. Without the subsidy, these tests would cost around $100.

Pioneers can get tested for free, while Chas card holders will pay $2. Younger Singaporeans, aged between 18 and 39, are also eligible for testing if they are at risk of diabetes. 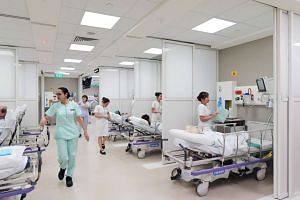 Subsidised tests can be done every three years, and the rates cover both the screening and a consultation if required.

"We want to reduce the drop-off rate of someone who tested positive but does not follow up to see the doctor," said Minister of State for Health Chee Hong Tat.

This appeared to be in tune with the thinking of Mr Gan and his colleagues, who discussed the Ministry of Health's (MOH) budget of $10.7 billion for this year and gave an update on the Healthcare 2020 masterplan.

Pointing to the worrying finding that obesity rates among Singaporeans aged 18 to 39 doubled between 1992 and 2013 - from 4.2 per cent to 8.4 per cent - Mr Gan said the war against diabetes, and towards health, must start with the individual. "A healthy diet is half the battle won," he added.

The Health Promotion Board will spend $20 million over three years, starting on July 1, to get more food manufacturers to use healthier ingredients.

If a condition develops, early detection helps one to manage it better. To keep a lid on costs, the Government is encouraging the use of generic drugs in cases where they are as effective as branded ones.

While three more hospitals are on the way, Senior Minister of State for Health Amy Khor said the home and community care network is being strengthened to treat people where they live. MOH will increase day and home-care services by 40 per cent by 2020. About 900 more community care nurses will be added to the current 4,900.

Overall, MOH will need over 9,000 more employees over the next three years and is rolling out schemes - like sponsoring course fees - to attract Singaporeans to take up these jobs.

After eight days of debate, Parliament yesterday approved a $75.1 billion Budget aimed at preparing Singapore for a more challenging future, where key areas of focus include helping people adapt and grow, helping firms transform and using technology to improve lives.