Every 32 minutes, an elderly person turns up at a public hospital emergency department because of an injury from a fall. Each month, about 100 seniors find themselves in hospital, staying a week or more because of such injuries.

And already the number of hip fractures among people aged 50 and older treated at public hospitals has gone up from 1,900 in 2004 to 2,500 last year - with half of them involving seniors aged 80 and up.

It is a problem that can only get worse as the population ages, bringing in its wake higher healthcare costs and lower quality of life for those affected, said Ms Gwenda Fong, director (successful ageing) in the Ministry of Health's Ageing Planning Office.

In an effort to curb it, the ministry, together with Khoo Teck Puat Hospital (KTPH), is starting a year-long pilot this week to assess the risk of falling for all seniors living in the north. Anyone judged to be at high or moderate risk will be referred to the relevant experts, such as a doctor or therapist, who will work with the individual to reduce it. The pilot will be adjusted for improvements, and rolled out eventually to the whole country. 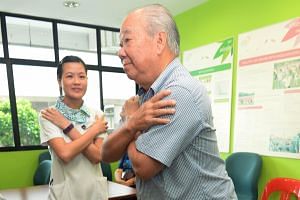 One of the most serious consequences of falls that healthcare professionals are hoping to prevent is hip fracture, for which recovery time can be up to 18 months.

Only half will recover fully while one in four "will completely lose (his or her) independence", said Dr Mallya Jagadish Ullal, a senior geriatric consultant at KTPH.

Madam Christine Morton, 66, has had two serious falls in the past two years. The first time, in 2013, she fractured her left hip and was wheelchair-bound for a spell.

Then in March this year, a fellow cleaner at the food court where she works ran into her with a trolley, knocking her to the ground. She suffered several fractures to her right hip. She is now terrified of crowds and moves even more slowly than before.

Two weeks ago, she returned to her job at the food court in Ang Mo Kio Hub, with lighter duties.

The pilot programme comes on top of existing fall prevention efforts by the Health Promotion Board and Agency for Integrated Care. The Housing Board also provides subsidised retrofits to make flats more elderly-friendly with slip-resistant toilet and bathroom tiles, and the addition of grab bars.

Ms Fong said the new programme builds on these, but goes further in identifying individuals at risk and working with them through customised programmes.

About 30 to 40 per cent of falls can be prevented, said Dr Mallya. For example, patients with osteoporosis can be treated for this brittle bone disease so even if they fall, they have a lower risk of fractures.