Sore muscles, cramps and body aches are what some housewives have to live with, after years of doing various chores to keep their home spick and span.

However, the persistent pain can also be a symptom of repetitive stress injury (RSI), a chronic condition that affects the tendons and joints of the body.

A 2013 study done by the Singapore General Hospital (SGH) found that about 75 per cent of 1,108 patients diagnosed with upper limb repetitive stress injury were women and, of these, nearly half were between 51 and 60 years old.

Housewives (21.1 per cent) formed the second most common demographic, behind professionals (30.6 per cent).

As the name suggests, repetitive stress injuries are the result of repeated stress sustained by tendons from a particular activity. 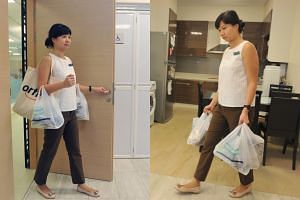 Chronic inflammation develops as patients continue with the activity and do not give the injury time to heal.

"Patients first notice a deep ache in these joints, which might abate or reduce if given time to rest," said Associate Professor Denny Lie, a senior consultant at the Singapore General Hospital's (SGH's) department of orthopaedics.

"This deep ache can worsen to outright sharp pain over time, as the trauma sustained by the tendon accumulates. Persisting in the same repetitive work could lead to ruptures of the tendon."

The SGH study did not collect data on the most common type of repetitive stress injury among housewives, but common culprits include tasks such as hand-washing clothes and hanging clothes with an awkward wrist posture.

"For example, carrying a pole of wet clothes or heavy bags of groceries exerts a tremendous force across the shoulders," said Prof Lie.

"As it is done repeatedly every day, it is not surprising many housewives suffer from shoulder pain."

NOT ENOUGH TIME TO HEAL

This deep ache can worsen to outright sharp pain over time... Persisting in the same repetitive work could lead to ruptures of the tendon.

Other types of RSI include trigger finger, in which patients feel finger aches and pain from activities such as continuous typing on a keyboard, and De Quervain's tenosynovitis, which is pain in the wrist when turning door knobs or carrying tea cups.

In Singapore, 5 to 10 per cent of the population have repetitive stress injuries. The condition is sometimes described as a modern malaise, a consequence of modern jobs and lifestyles that involve hours of sitting at desks or in front of computers.

According to the US Department of Labour, Occupational Safety and Health Administration in 2014, RSI is the most common and costly occupational health problem in the United States, costing more than US$20 billion (S$27 billion) a year in worker compensation.

The reason for its prevalence among housewives is, however, distinctly unmodern.

Another SGH study done in 2010 among women with upper limb RSI found that housewives were reluctant to make adjustments in their daily routine due to longstanding perceptions about housework.

Older women, especially, were less willing to make changes to their routines. Those who took part in the study had a mean age of 58.5 years.

Ms Yang said: "These women have a strong emotional attachment to the way they do their housework and require it to be of a high standard.

"This can become a barrier to making any changes as more ergonomic practices may not meet the quality or efficiency these housewives expect."

For example, some housewives may opt to wash clothes by hand instead of using a washing machine. This can lead to RSI in the hands and wrists.

Ways of doing housework and the readiness to accept change also vary among housewives.

Said Ms Yang: "Our therapists have therefore had to adapt their ways of communicating with patients and educating them to facilitate behavioural change."

Occupational therapy and physiotherapy are the main ways to treat RSI.

In more severe cases, steroid injections to the affected tendon may be needed to reduce inflammation. Platelet-rich plasma injections which promote the healing of injured musculoskeletal tissue are also an option.

However, Prof Lie stressed that early recognition and treatment are key for repetitive stress injuries.

"If your joint is in pain, stop the activity or household chore immediately. This will prevent continuous strain on the tendons," he said.

"Self-medication with ointments can be useful but if the pain persists, patients should seek medical help sooner, rather than later."

Simple measures can also help prevent repetitive stress injuries. Adjusting the height of the ironing board can help reduce neck strain and back pain.

Standing on a stool when doing overhead work can reduce the strain on the arms as well.

Said Prof Lie: "Maintaining a reasonable level of fitness and doing regular stretches during rest breaks can help reduce the severity of repetitive stress injuries. This applies across all fields of work."

SEE REDUCE YOUR RISK OF RSI

A version of this article appeared in the print edition of The Straits Times on October 25, 2016, with the headline 'Persistent pain at work and at home'. Subscribe
Topics:
More
Whatsapp Linkedin FB Messenger Telegram Reddit WeChat Pinterest Print Purchase Article Copy permalink