A patient said he stopped going swimming, because when he got into a pool, he saw everyone else starting to leave.

Another teenage patient's mother had to ask the doctor to write a letter affirming that her daughter's condition was not contagious, because the school was reluctant to let her attend class.

These are some of the experiences of patients with psoriasis, said Dr Colin Theng, president of the Psoriasis Association of Singapore. Because of such social stigmatisation, he said the association, which has functioned mainly as a support group, will intensify its outreach efforts to schools and workplaces next year.

"To combat social stigmas, we want to conduct more talks and roadshows," he said. "We aim to visit more places to educate teachers, classmates, employers and colleagues about this condition."

This announcement followed World Psoriasis Day, which the association marked on Oct 28 with an event at the Nee Soon East Community Club.

Psoriasis is a chronic skin disease that manifests itself as thick, red patches that can be itchy, scaly and can peel. It occurs when the immune system is over-activated, for unclear reasons, so skin thickens and multiplies rapidly.

"People think psoriasis is contagious and they don't want to shake hands or even sit beside a patient on the bus," said Dr Theng. "We are trying to think of more ways to raise awareness, because psoriasis is still not as well known as other skin conditions such as eczema."

People think psoriasis is contagious and they don't want to shake hands or even sit beside a patient on the bus.

DR COLIN THENG, president of the Psoriasis Association of Singapore.

Psoriasis is treated with topical creams for mild cases, oral medication and light therapy, in which the skin is exposed to ultraviolet light for specific durations. There are also new injectible medicines being developed.

This effort to educate the public also comes on the heels of a survey conducted last year, that showed that psoriasis patients could develop mental health issues because of how they are shunned by others.

The study conducted at the National Skin Centre found 17 per cent of psoriasis patients might have anxiety, while another 15 per cent might have depression.

About 1 per cent of Singapore's population have psoriasis.

In the last few years, the number of psoriasis patients seeking counselling has also risen, said medical social worker Ivan Ang from the National Skin Centre. This year, he has seen about 100 patients and caregivers, compared with the estimated 60 patients in 2015. 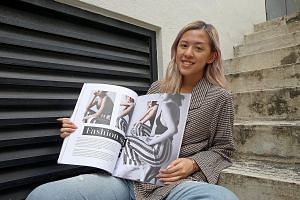 "Some patients develop depression or social isolation, because they don't dare to leave the house with their skin condition," he said.

Psoriasis patient Shree Gopal, 44, a polytechnic lecturer, agreed. She was stared at because of her condition and it took a toll on her mental well-being.

"Sometimes I wake up in the morning and see skin flakes everywhere. My skin can also crack and bleed and stain my clothes," she said. "It's very hard to go out and meet new people like that. It made me feel self-conscious."

She has started writing a personal blog, while also collecting stories from others. "I'm keen to do anything to help others like me."

A version of this article appeared in the print edition of The Sunday Times on November 05, 2017, with the headline 'People left pool when psoriasis patient got in'. Subscribe
Topics:
More
Whatsapp Linkedin FB Messenger Telegram Reddit WeChat Pinterest Print Purchase Article Copy permalink