A 29-year-old nursing aide who works at Orange Valley Nursing Home in Balestier is one of the two new unlinked cases in the community reported yesterday.

The Ministry of Health (MOH) said the Indian national was asymptomatic and had received his first dose of the Covid-19 vaccine on April 23, and his second dose on May 14. He was swabbed on Tuesday as part of the nursing home's surveillance testing for its staff, and tested positive the next day.

His serology test is also positive.

The other unlinked case is a 74-year-old Singaporean man who works at a sundry store at 115 Bukit Merah View Market and Hawker Centre. He received his first dose of the vaccine on March 16, and the second dose on April 6.

The man developed a cough on Tuesday. He had a sore throat the next day, and went to see a doctor on the same day. MOH said he was immediately isolated after his antigen rapid test was positive.

His polymerase chain reaction test also came back positive, and his serology test result is pending.

The two linked cases in the community include a 40-year-old Malaysian who works as a baker at St Leaven in Takashimaya and tested positive on Wednesday.

The man, who had received his first dose of the vaccine on May 31, was asymptomatic and is a family member of a 35-year-old Malay-sian woman who works as a retail assistant at Four Leaves bakery in Ion Orchard.

The other case in the community is a 40-year-old inmate at Changi Prison Complex. He is a close contact of a chef at the prison who had tested positive earlier.

He developed a cough and sore throat on Monday, after being quarantined on May 13. He has preliminarily tested positive for the Delta variant of the virus, bringing the number of cases in the Changi Prison Complex cluster to 16. 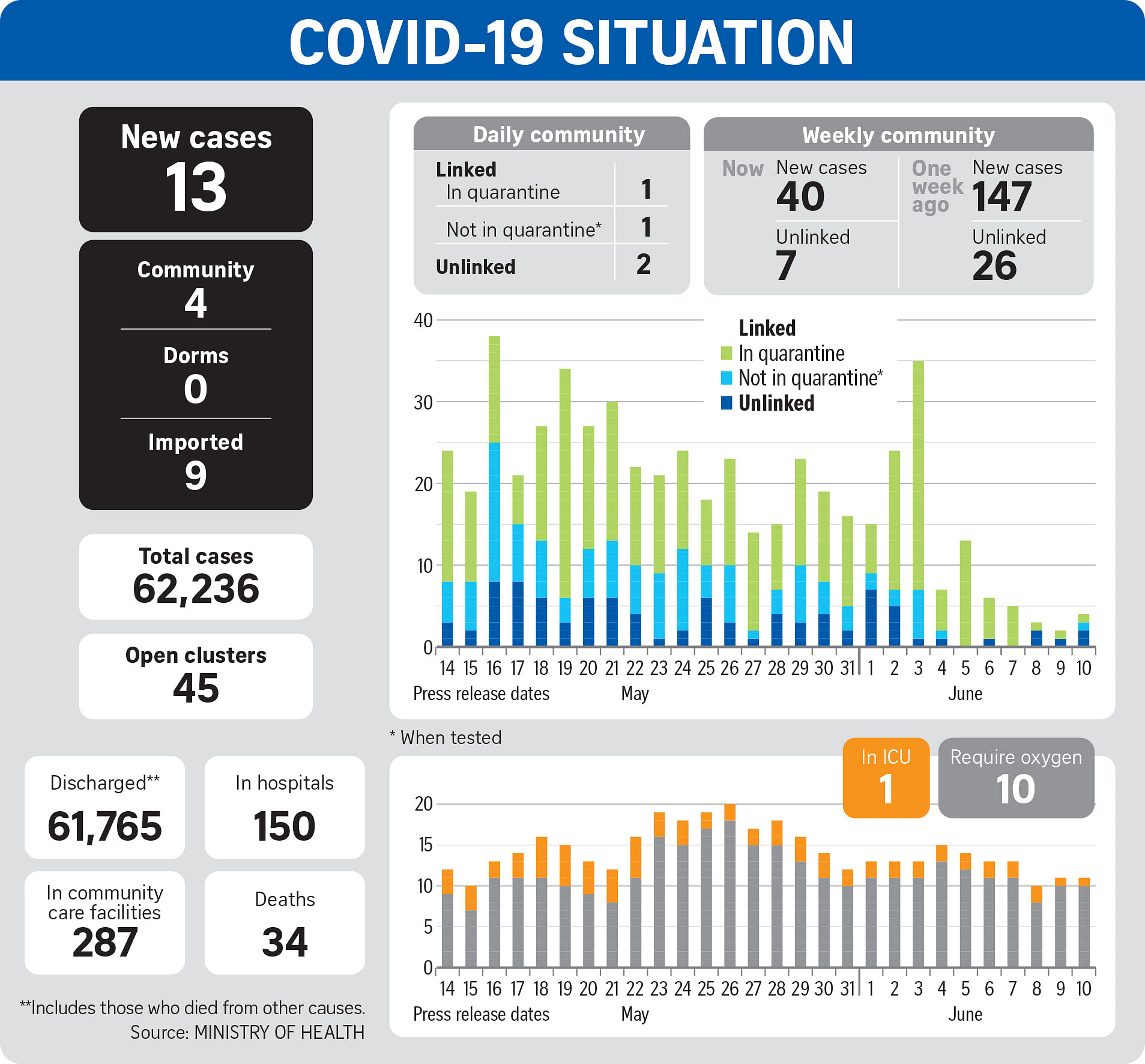 Separately, MOH has closed a cluster linked to a private-hire Grab driver.

There are 150 cases still in hospital, including one in the intensive care unit. Another 287 cases are in community care facilities. Singapore has had 34 deaths from Covid-19 complications.

Last night, MOH also said in an update on testing operations that all 452 residents and visitors of 325A Sumang Walk had tested negative for Covid-19. A total of 4,347 residents and visitors to eight HDB blocks near Hougang Avenue 8, including Block 506, had also been swabbed, with 4,273 testing negative and 74 results pending.