There has been no spike in tuberculosis (TB) cases here despite several recent reports of people coming down with the disease.

So far this year, 973 people have been diagnosed with the disease.

For the past decade, Singapore has had between 1,250 and 1,560 newly diagnosed TB cases among residents each year, with the majority in people 40 years and older.

If foreigners, both long-staying as well as short-term, are taken into account, there were 2,920 cases in 2014.

A Health Ministry spokesman told The Straits Times that TB infections are "not uncommon in our population", adding: "The number of new active TB cases among residents fluctuates from year to year, but within a stable range." 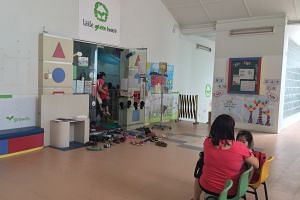 TB in pre-school: All pupils and staff screened

The number of new active TB cases among long-staying foreigners has not been on the increase over the past few years too and has fluctuated within a stable range, said the spokesman.

Last year, 1,498 Singaporeans and permanent residents were diagnosed with TB, as were 502 long- staying foreigners.

There have been several reported cases of TB in recent months.

Yesterday, pre-schoolers and staff from a kindergarten in Bukit Batok were screened for TB after a female teacher was diagnosed with the disease. In June, a cluster of multi-drug-resistant TB cases was reportedly identified at a Housing Board block in Ang Mo Kio.

TB is a bacterial infection - usually affecting the lungs - that is spread through water droplets, such as from sneezing or coughing, from someone who has the disease.

It usually takes prolonged close contact with an infected person to get the bug.

The risk is higher for people with weak immune systems, such as drug abusers, those with HIV/Aids and toddlers. However, there is very good treatment for TB today.

The Health Promotion Board says on its website: "Infection with TB can cause permanent lung damage if not treated early. It can also spread to other parts of the body... where it can lead to life-threatening complications.

"The most serious complication, however, is when TB infection recurs and the strains causing the disease are resistant to multiple anti-TB medications."