In a bid to encourage more live donors to give kidneys to their loved ones, the National Kidney Foundation (NKF) is offering more financial subsidies to cut transplant costs for low-income patients.

It will reimburse up to two pre-transplant screenings and evaluation costs for each kidney recipient.

The matching tests, prescribed by hospitals during an evaluation to ascertain whether a person is a suitable donor, usually cost around $2,000 to $3,500.

"Our scheme is not intended to 'enrich' the living donor but rather to assure them that pre-and post-transplant related medical charges will be taken care of by us," said Mr Tim Oei, the NKF's chief executive.

"We hope to provide ease to both kidney recipient and donor by removing their very first barrier and financial concern."

He announced these moves at the Foundation's Sit-A-Thon event held yesterday at Singapore Sports Hub to raise awareness of kidney failure, early detection and prevention of kidney disease, as well as to promote kidney transplants .

Other changes to its funding coverage for beneficiaries under its Kidney Live Donor Support Fund include revising its one-time reimbursement for loss of income.

Beneficiaries will be reimbursed for the loss of two months' income or $8,500, whichever is lower, up from $5,000 previously.

Only the recipient of the kidney donation will be required to pass the means test to be covered under the support fund instead of both recipient and donor. The changes will take effect from November.

Singapore has one of the world's highest incidences of kidney failure with four new cases of end-stage renal disease each day. The projected number of kidney failure sufferers is expected to rise, given the ageing population and rising prevalence of chronic diseases like diabetes. 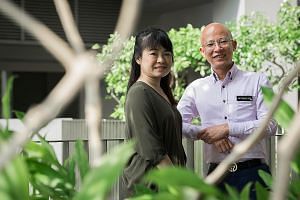 There are about 7,000 people on dialysis, with most on haemodialysis, which is carried out at dialysis centres. This involves removing and cleaning a patient's blood before returning it. It takes four hours and patients do it three times a week.

Meanwhile, only 93 people received a kidney last year, though this figure was up from 69 in 2013.

The NKF's Kidney Live Donor Support Fund, which provides financial assistance to needy kidney donors, has supported 39 beneficiaries since its inception in 2009.

Mr Oei said donating a kidney is a difficult decision, due to concerns such as surgical risks, poorer health and whether the donor can lead a normal life with one kidney.

Many studies have shown that living donors do lead normal lives after surgery, and that the remaining kidney is able to take over the function of both kidneys.

Health Minister Gan Kim Yong said in a speech at the Sit-A-Thon that his ministry worked with polyclinics to implement a national chronic kidney disease prevention programme. It aims to prevent or slow progression to kidney failure, through control of factors such as diabetes and high blood pressure, and the use of kidney protective medication. The programme has been implemented at 15 polyclinics and will be rolled out to the rest by 2020.

The mother of four estimated that they spent $40,000 on the transplant. "The financial support that replaces my husband's loss of income due to inability to work for a few months and the insurance helped us and gave us peace of mind," said Madam Nurani. "I feel stronger now and am glad to be given a second chance at life."