Cancer is no longer the death sentence it once was. There have been vast improvements in both detecting and treating cancer, and new technology has produced highly effective therapies that can kill tumour cells while leaving normal ones unscathed. In this new weekly series, The Straits Times speaks to patients who have beaten the disease, and uncovers the cutting-edge research in the battle against cancer.

One in three people can expect to get cancer some time in their life, generally as they age.

The National Cancer Registry puts it at one in four men and five women getting cancer by the time they are 75 years old. As the population ages, even more people will be hit by this disease, as ageing is a major risk factor.

The number of people getting cancer has been rising over the years, especially among women. Today one person in Singapore is diagnosed with cancer every 20 minutes.

But a diagnosis of cancer is no longer the death sentence it was some decades back. The Cancer Registry notes that between 1973 and 2012, survival rates for all cancers improved for both men and women.

Treatment for some cancers is so good now that the patients can expect to live a normal lifespan. Unfortunately, this does not hold true for all cancers.

Generally, the earlier the cancer is diagnosed, the better the outcome, although certain cancers are very treatable even if discovered in the late stage, while others are so aggressive that even early discovery does not help that much.

The best thing would be to prevent cancer if possible. The World Health Organisation says one in three cancers diagnosed today could have been prevented altogether. For example, there are now vaccines that can significantly reduce the risk of getting liver and cervical cancers. These vaccines are available in Singapore. 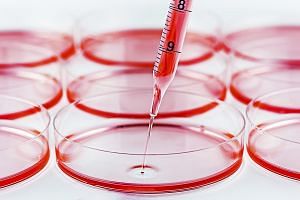 Taking the fight to the enemy with lab-grown tumours

Obesity and smoking are also known to be risk factors for many cancers, such as colorectal, lung, liver and stomach.

Though its exact relationship with cancer is not yet well understood, according to Cancer Research UK, "extra fat in the body can have harmful effects, like producing hormones and growth factors that affect the way our cells work".

People who are obese also do not respond as well to treatment.

In May the American Institute for Cancer Research released a paper showing that regular exercise could lower the risk of 13 cancers. The research team from AICR and the National Institutes of Health looked at 1.44 million people aged 18 to 98 over an 11-year period. It said the strongest evidence is for breast, endometrial and colon cancers, where exercise can reduce risk by 25 to 30 per cent

The team believes that exercise regulates hormones reducing the risk for the women's cancers, and speeds up processing of food through the colon, reducing exposure to cancer-causing foods.

By reducing weight, quitting smoking and exercising regularly, people will be able to reduce their risk of getting cancer.

Today, about a third of cancer patients can live a normal lifespan because treatment has effectively destroyed their cancer. Another one-third are able to live with the cancer for many years because of vast improvements in treatment.

Professor Chng Wee Joo, director of the National University Cancer Institute, said cancers like low-grade lymphoma or multiple myeloma usually hit older people. But they can now survive 10 to 15 years. He said: "The treatment is very low-intensity. They take pills, so they don't need to stay in hospital for long. They have good quality of life. No one would know they have cancer."

A diagnosis of cancer is no longer the death sentence it was some decades back. The Cancer Registry notes that between 1973 and 2012, survival rates for all cancers improved for both men and women. Treatment for some cancers is so good now that the patients can expect to live a normal lifespan. Unfortunately, this does not hold true for all cancers.

Dr Daniel Tan, a senior oncologist at the National Cancer Centre Singapore, said this decade has been one in which the development of cancer drugs is "rational".

This is in contrast to the past, when cancer drugs were found "serendipitously". Today, researchers are developing drugs specifically targeted at the proteins or mutations linked to specific cancers. Such targeted therapies focus on a sub-type of cancer and success is generally higher.

Another exciting new area of development is in using the person's own immune system to fight the cancer, known as immunotherapy.

Prof Chng said in order to give people here a chance at the latest treatments available, one of the cancer institute's strategies is to increase its capacity to do clinical trials for upcoming drugs. This way, trial subjects get access to drugs early and for free.

Clinical trials let patients try out treatments that are not yet on the market, with the cost largely borne by the company that produced the drug, or the centre doing the trial.

While there is no guarantee that the treatment being researched will work for the patient, many who take part are patients in the late stages of the cancer for whom conventional treatment has failed.

For them, taking part in such trials holds out hope with very little downside.

Next week, The Straits Times looks at the fight against blood cancers.