The Health Ministry is also giving out $10 million in research and development grants, as part of efforts to modernise the industry.

These changes were announced by Senior Minister of State for Health Chee Hong Tat at the Nanyang Technological University (NTU) yesterday.

"Tradition and science can co- exist - it is not about choosing one or the other," Mr Chee said.

"It is about integrating the best practices from both traditional and scientific domains."

He was speaking at the convocation ceremony for NTU's biomedical sciences and Chinese medicine double degree programme.

There are currently 3,115 TCM physicians registered with the TCM Practitioners' Board. About 63 per cent are diploma holders, while another 26.5 per cent have bachelor's degrees. 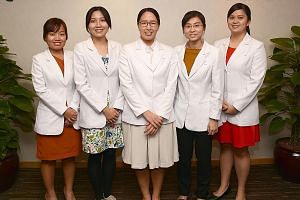 Young TCM sinsehs on the rise

At present, TCM physicians are encouraged, though not compelled, to earn at least 25 continuous TCM education points a year through accredited events such as those organised by the Institute of Chinese Medical Studies.

Under the new rules, it will be mandatory for practitioners to chalk up such points if they want to renew their practising certificates.

This is in line with what is already being done overseas, Mr Chee said.

But the finer details - such as how many points must be earned in a year - have yet to be decided on, he added.

The new requirements will take effect after the TCM Practitioners Act is amended, which will probably occur within the next 12 to 18 months. However, there will be a grace period to allow those in the industry to adapt.

"I urge all TCM practitioners to start preparing for this so that you refresh your skills and knowledge and keep up to date with the latest TCM developments," Mr Chee said.

Physician Wong Chin Nai, who has been practising Chinese medicine for nearly 50 years, said that it is always a good thing to improve standards in the industry.

"But some of the older doctors are wondering if they can have lower requirements since they have already worked for so long and have a lot of experience," added the 77-year-old.

Under the TCM Development Grant, $5 million will be set aside to help those in the sector improve their skills. Application opens in January. The grant will cover training for TCM professionals, including acupuncturists, clinic assistants and herbal dispensers listed with the TCM Practitioners' Board.

Lastly, those in the industry can tap the grant to adopt new technologies that could improve efficiency.

Mr Tan Lee Huak, who is director of TCM company Science Arts, said that the money will come in useful when organising talks for those in the industry.

"Sometimes when we organise talks, only five or eight people show up - but we have to continue anyway," he said. "Hopefully, with the added support, we will be able to continue organising such events."

Another $5 million will go towards TCM research over the next five years. This builds on an existing $3 million research grant set aside in 2014.

Speaking to reporters at the sidelines of the event, Mr Chee said that TCM can play a big role in health promotion and rehabilitation.

"After you come out of hospital, how do you help a person to get back, as quickly as possible, to good health?" he said. "I think things like tuina (therapeutic massage) actually play a very useful role."