SINGAPORE - When Mr Peter Taye was diagnosed with prostate cancer about three years ago, he was very upset.

But Mr Taye clung on with the aid of his wife, who constantly encouraged him to try new things, one of which was joining Dover Park Day Care, a palliative daycare service for patients with terminal illness and their caregivers.

The daycare, which began operations in April this year, was officially opened on Wednesday.

It is one of just three palliative daycare services listed by the Singapore Hospice Council.

Operating on weekdays from 9am to 5pm, the daycare is free, and will provide free transport and meals for its patients.

Mr Timothy Liu, chief executive officer of Dover Park Hospice, which runs the daycare, said the service is funded by the Ministry of Health and the hospice.

The latter funds the daycare through donations.

Mr Liu said: "Daycare is an important aspect of palliative care and it is subsidised to ensure it is affordable to patients who will benefit from it." 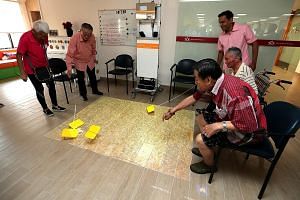 It Changed My Life: A life devoted to helping others die with dignity

Located in Novena, the centre runs on a referral basis for patients who have been diagnosed with advanced illnesses, are functionally able to tolerate a transfer to daycare, and have care needs that can be met in a hospice daycare.

The centre currently takes up to 10 patients a day but there are plans to eventually expand its services to 30 patients by 2021.

Dover Park Hospice's medical director Ong Wah Ying said palliative day care differs from other eldercare centres as the therapists are trained to look out for the psycho-emotional well-being of patients with palliative care needs.

Therapy sessions are used to assess and support patients, and a hotline is available for support after office hours.

The daycare also provides caregivers with an alternative if they need some time off for themselves or a respite from their duties.

And these duties as a caregiver are not easy. Mr Taye's wife, 70-year-old Betty Taye, had to clean his bedsores and help him apply medication on a daily basis.

The couple have been married for more than 40 years and have a son.

She quit her job as a kindergarten teacher to care for him, and ended up staying at home most of the time.

She would also feel worried every time she had to leave the house to get groceries.

But all that has changed since Mr Taye, who used to work in manufacturing, joined the daycare, which he goes to around thrice a week.

Though she never considered caring for her husband a burden, Mrs Taye said she now has more time and peace of mind to pursue her own hobbies and go out with friends.

"It's a relief for me, I don't have to worry because there's someone here," she said.

'We have only each other': 83-year-old man cared for elderly housemates, oversaw their funeral rites

Mr Taye, who was a volunteer at an old folks' home, said: "I used to see old people sitting at a table staring at a wall, and I'd think that if that's daycare, there's no need for me to come here.

"But when I came and saw all the services they have here, how different it is, it really changed my outlook... I feel the warmth here."

Dover Park Hospice's chairman Robert Chew said the activities are designed to help patients live their lives to the fullest.

"This will help them have a sense of being valued and restore dignity to their lives," he said.