More than 180,000 students sign up for jabs; experts allay concerns of parents

More than 20,000 students have taken their jabs since the national Covid-19 vaccination drive for more than 400,000 students kicked off on Thursday.

Over 180,000 students have signed up to get vaccinated after more than 250,000 messages were sent out to Primary 6, secondary school, pre-university and polytechnic students, said the Ministry of Education yesterday.

On Thursday, The Sunday Times team visited five community centres and spoke with parents who were accompanying their children for vaccination about their concerns, if any, on the procedure.

Under the national programme, those aged between 12 and 17 can receive only the Pfizer-BioNTech vaccine, while those aged 18 and above can opt for either the Pfizer or the Moderna jab.

Parental consent is required for those below 18. Parents or guardians will also have to accompany those below 13 to their vaccination appointments.

The Sunday Times interviewed 24 parents but only three said they did not plan to allow their children to be vaccinated.

Ms Florence Poh, 45, who was keen for her son to receive the jab, said she was alarmed by the high number of Covid-19 cases detected in schools and tuition centres recently.

Since April 1, a total of 96 students and children from 59 schools have been infected with the coronavirus.

When two students from The Learning Lab tuition centre at United Square were confirmed to have Covid-19, Ms Poh worried about her son who attended classes at the centre on May 8, the same day the confirmed cases were reported.

The marketing manager said: "We were very anxious. My son was taking one of his last mid-year papers and we were just waiting for a call from the Ministry of Health."

The call never came and Yi En, 16, who is a student at Hwa Chong Institution, received the Covid-19 jab on Thursday at Bishan Community Club. His only side effect was a sore arm. 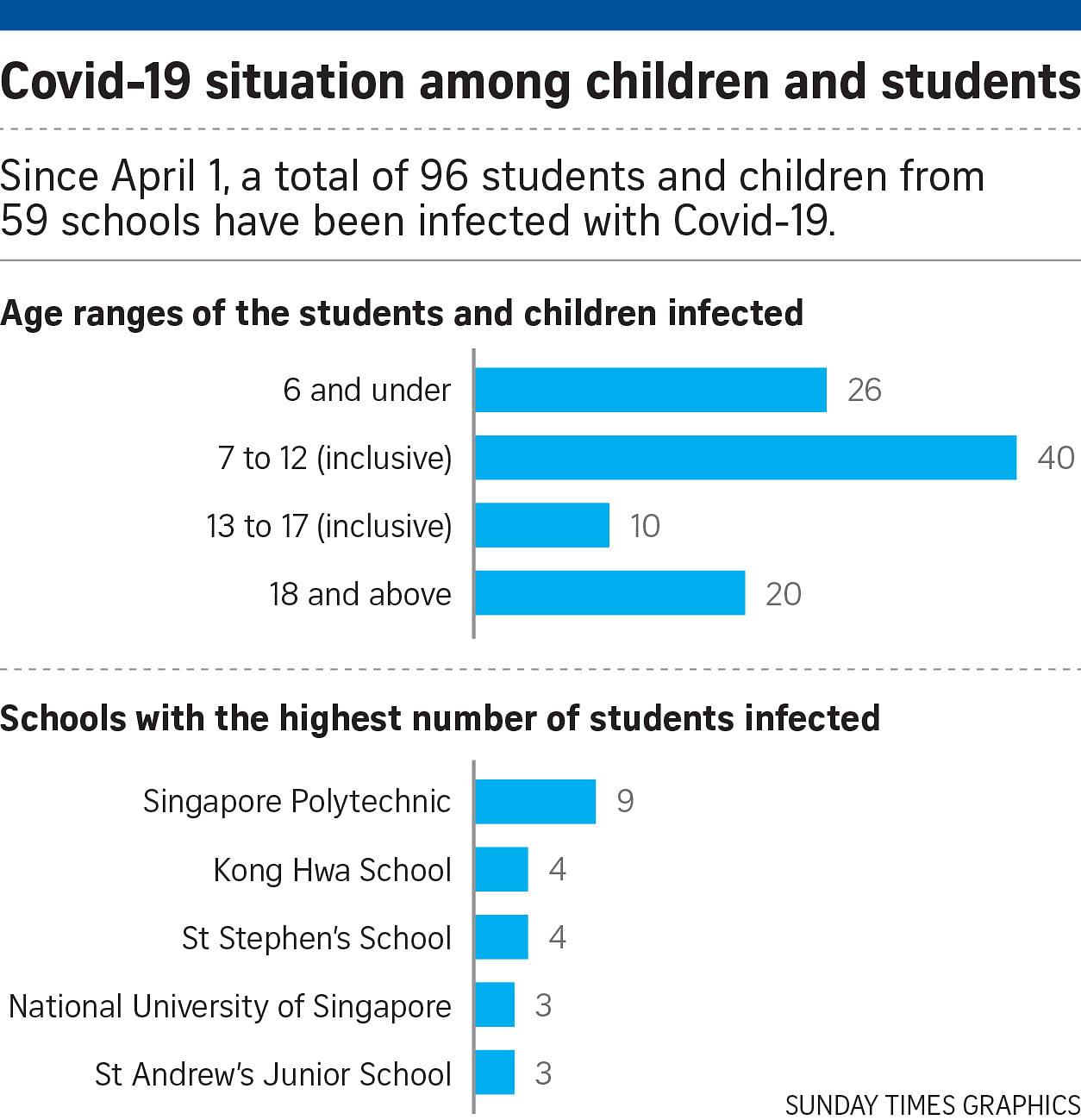 Like Ms Poh, anxiety grew for another parent, Mrs Stacey Ng, 49, after the Learning Point tuition cluster emerged with a tutor testing positive on May 12.

Her 18-year-old daughter Heidi did not suffer any side effects after being vaccinated at Tanjong Pagar Community Club on Thursday, Mrs Ng said.

The numbers are adequate for estimation of safety and efficacy in a vaccine where we already know the safety profile from prior clinical trials.

ASSOCIATE PROFESSOR HSU LI YANG, on whether Pfizer's trials were rigorous enough for its vaccine.

Mrs Ng, who described herself as a consultant, said: "There were a lot of students and tutors involved in that cluster. The spread of the virus is very difficult to control. It's good to get kids vaccinated for herd immunity."

Ms Kavitha Ganaisan, a mother of two, did not need much convincing because she already knew first-hand what it was like to lose someone to Covid-19.

On May 19, her husband's grand-uncle died in India from complications due to the virus.

His death, among other things, led Ms Kavitha, 42, a student care centre teacher, to decide to vaccinate her two daughters, aged 13 and 19.

When the Government announced that the shot would be available to students aged 12 and above, the mother urged both her daughters to take it.

Ms Kavitha said: "I don't want my daughters' lives to be disrupted even if they fall ill. We still don't know the causes and consequences of Covid-19. It's best to get vaccinated."

Special arrangements have been put in place by healthcare providers to ensure the safety of schoolchildren being vaccinated.

Raffles Medical has prepared an emergency kit which includes adrenaline auto-injectors suitable for children weighing less than 30kg. The device can be used to quickly reverse allergic reactions.

Healthway Medical said it would opt for bigger booths whenever possible so that parents can accompany their children while they are being vaccinated.

Some parents, like Mr Cheong Tien Beng, 48, still harbour doubts about the vaccines even though he made sure his daughter Jamie, 17, a Victoria Junior College student, received her shot at Sengkang Community Club on Thursday.

The civil servant questions if sufficient clinical trials were conducted given that vaccines typically take years to develop. Research on Covid-19 vaccines began in earnest only early last year after the world was gripped by the pandemic.

Speaking to The Sunday Times on Friday, Mr Cheong said: "My daughter had a headache and was dizzy for the whole day. Between experiencing side effects and risking Covid-19, we will still very likely go ahead with the second dose."

Responding to queries from The Sunday Times on whether Pfizer's trials were rigorous enough for its vaccine, Associate Professor Hsu Li Yang said: "The numbers are adequate for estimation of safety and efficacy in a vaccine where we already know the safety profile from prior clinical trials."

Last Monday, the multi-ministry task force on Covid-19 said that the safety and efficacy of the Pfizer vaccine among those aged 12 to 16 were consistent with the results reported in the population of vaccinated adults.

This was based on ongoing phase three studies involving nearly 2,300 adolescents between the ages of 12 and 16.

Prof Hsu, who is vice-dean of global health at the National University of Singapore's Saw Swee Hock School of Public Health, added: "The current period of intense scrutiny on Covid-19 vaccines has shown no new and long-term side effects after several months and millions of vaccinations."

He was addressing the concerns of parents still worried about complications in their children.

Housewives Ying Tan, 41, and Patricia Lok, 43, said they were worried that the vaccine would affect menstrual cycles following reports in The Guardian and Bloomberg.

Ms Lok, who is not planning to vaccinate her daughter, 12, a student at CHIJ Our Lady Queen of Peace, said: "My daughter's body is still growing. She is at the age where she is starting puberty. If she is a little older I might be more comfortable letting her take the vaccine."

Ms Tan said she had also heard that the Pfizer vaccine may be linked to cases of myocarditis, or heart inflammation, in young men.

But she went ahead and signed her daughter up for the jab at Bishan Community Club on Thursday.

Ms Tan said: "There is hesitancy because there isn't a lot of data. But we don't have a choice.

"Covid-19 is almost as bad as a war. People in other countries are dying and are denied help at the hospitals."

Professor Dale Fisher, an infectious disease expert at the National University of Singapore, noted that young adults with myocarditis generally had a very minor, self-limiting illness. This means it will be resolved without treatment.

He referred to a Reuters article that said 95 per cent of 275 cases of myocarditis identified in Israel between December and last month were classified as mild.

Since Singapore reported its first case of Covid-19 on Jan 23 last year, no child or adolescent has died.

Internationally, the mortality rate among children infected with the coronavirus is about 0.01 to 0.03 per cent, said Prof Hsu.

"So while it is rare, deaths do occur," he said.

Prof Fisher added that the Covid-19 vaccine is very good at reducing severe and symptomatic infection among Covid-19 patients.

"Once Covid-19 is endemic, the risk of disease will be higher, so it is essential to be vaccinated. I would not recommend waiting," he said.

Covid-19 situation among children and students

A version of this article appeared in the print edition of The Sunday Times on June 06, 2021, with the headline 'Most parents keen to get kids vaccinated'. Subscribe
Topics:
More
Whatsapp Linkedin FB Messenger Telegram Reddit WeChat Pinterest Print Purchase Article Copy permalink