SINGAPORE - The Ministry of Health (MOH) will look into whether Community Health Assist Scheme (Chas) beneficiaries can be informed of their subsidy each time they use their card at a medical or dental clinic.

Dr Chia Shi-Lu (Tanjong Pagar GRC) asked in Parliament on Friday (March 1) if patients could be told of the subsidies they are getting from the Government while they are still at the clinic, "so that they can verify the amounts themselves".

Both medical and dental clinics have been taken off Chas in the past for suspected cheating.

Since January 2017, the ministry has required clinics to give Chas patients an itemised bill reflecting this. But not all clinics do so.

Senior Minister of State for Health Edwin Tong said: "We plan to look into this during future rounds of system enhancements."

Dr Chia told The Straits Times: "This is so that patients can better keep track of the type and amount of deductions, as some may not keep or inspect the bills, and it's an additional safeguard that the amount has indeed been deducted.

"Just because it's reflected on the bill may not mean the subsidy was applied, perhaps due to a glitch." 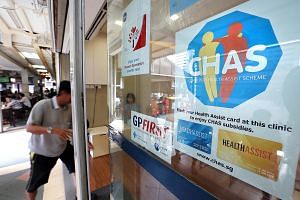 IT error led to wrong Chas subsidies for 7,700

Chas patient not subsidised for polyclinic X-rays after GP referral

Case of lack of subsidy for Chas patient raises questions

Both Dr Chia and Nominated MP Walter Theseira had asked the MOH about the recently announced computation mistakes that resulted in some people getting the wrong subsidy.

Associate Professor Theseira asked to what extent the cost of wrongly giving higher subsidies can be recovered.

Mr Tong reiterated that the estimated loss of $2 million will be borne entirely by the vendor.

People who qualified for the blue card but had been given the orange card that provides lower subsidy have had their cards changed. Those who got the blue card instead of the orange one will continue to enjoy the higher subsidy for the two years the cards are valid.

Mr Tong said the error occurred when the system was migrated and the wrong software was uploaded.

He assured the House that Chas "is a mature system that has been running since 2012". But he added that the ministry is constantly seeking to improve quality assurance.

The MOH is also reviewing areas that can be strengthened, such as having an independent review for every major system change from now on, Mr Tong added.