He mostly stayed home, did not go to work and did not take public transport to hospital

The first person in Singapore with the Zika virus had stayed home most of the time after returning from Brazil on May 7, and did not go to work before he was admitted to hospital.

The 48-year-old, who developed fever and rashes three days after landing here, also did not take public transport to Mount Elizabeth Novena Hospital on May 12, when he was admitted before testing positive the next day.

All this helped minimise the chances of him being bitten by mosquitoes, which could then spread the virus, revealed the Health Ministry yesterday, even as about 160 National Environment Agency (NEA) officers, contractors and volunteers stepped up anti-mosquito measures in Watten Estate in Bukit Timah, where the man lives.

They carried out fogging, conducted checks and distributed fliers explaining anti-mosquito measures to minimise the risk of the Zika virus spreading.

Singapore's first confirmed Zika case was announced last Friday. The man, a permanent resident, had been in Sao Paulo, one of the world's most populous cities, from March 27 to May 7 on a business trip. Brazil is the country most affected by Zika. Between Jan 3 and April 2, more than 91,000 Zika cases were reported there. The Zika virus is spread by the Aedes mosquito, which also transmits dengue. 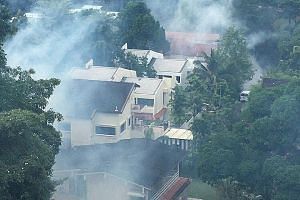 Zika symptoms are similar to dengue, but milder, and include fever, rashes and joint and muscle aches. However, preliminary research has led the World Health Organisation to conclude it can cause microcephaly - or abnormally small heads - in unborn children if mothers are infected. It is also a cause of Guillain-Barre syndrome, a rare condition in which a person's immune system attacks his nerves.

"For most people, Zika is not dangerous, and some of them will not even have symptoms," said Minister for the Environment and Water Resources Masagos Zulkifli yesterday. "But we know from reports around the world that Zika may affect unborn babies, resulting in microcephaly, and therefore we are worried."

Asked if the authorities will implement temperature screening at Changi Airport for people arriving from Zika-affected countries, he said it would be "quite impractical" as symptoms can take a while to develop. In four out of five cases, those infected show no symptoms at all.

Mr Masagos encouraged all Singaporeans to keep up the fight against the Aedes mosquito, especially since this is prime breeding season. "We are at the tail end of the hot season and going into the wet season," he said. "This is quite a dangerous time for us as this is the right time for mosquitoes to breed."

NEA, along with MP for the Holland-Bukit Timah GRC Vivian Balakrishnan, urged the 800 or so households in the area to work with the authorities, or officers will have to enter homes by force to check for mosquito breeding.

Dr Balakrishnan, who was the Environment Minister before becoming Foreign Minister, visited the Watten Estate area yesterday and wrote on Facebook: "We now need residents to help by opening their homes for inspection and to enable NEA staff to conduct special misting to eliminate all adult mosquitoes and breeding areas.

"NEA also needs urgent access to all vacant homes and will take legal steps to gain access if necessary."

NEA said notices will be served to those whose homes are not accessible. They will be asked to make an inspection appointment.

If they fail to respond, NEA officials may enter by force, starting early this week.

A version of this article appeared in the print edition of The Sunday Times on May 15, 2016, with the headline 'Minimal exposure from Zika patient'. Subscribe
Topics:
More
Whatsapp Linkedin FB Messenger Telegram Reddit WeChat Pinterest Print Purchase Article Copy permalink