A "Mammobus" with equipment to screen for breast cancer has seen more women getting screened for the first time.

The number of women being screened for the first time rose from 925 in 2017 to nearly 2,000 last year, after the Community Mammobus programme was launched in January last year.

The National Healthcare Group Diagnostics (NHGD), Breast Cancer Foundation and Singapore Cancer Society, which collaborated on the programme, said more women are going for screenings, as they are now "more accessible and affordable".

They have extended the programme by one year and it will now end next January.

NHGD said that from January last year to February this year, the bus was deployed 167 times.

Yesterday, the bus visited Punggol 21 Community Club, where more than 40 women registered to get screened, out of which about 30 were doing it for the first time.

The screening in the bus is free for Singaporeans doing it for the first time. Those who have been screened before, including at polyclinics, pay $10 each.

There is no difference between how breast screening is carried out in the bus and in polyclinics.

Screenings in polyclinics cost about $50 each for Singaporeans regardless of whether it is their first time being screened.

The Mammobus programme is also open to permanent residents and foreigners, though they will be charged more.

Results will be mailed to participants within about three weeks.

There are about 1,930 newly diagnosed cases of breast cancer each year, and about 420 deaths, according to an annual report by the Singapore Cancer Registry in 2015. 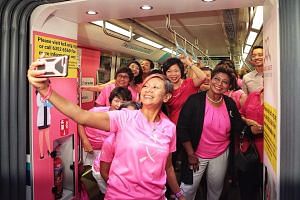 NHGD executive director Lim Soh Har said: "Through this tripartite effort, we have successfully reached out to more women, particularly those who are screening for the first time... Such screenings support the Ministry of Health's objective of placing more emphasis on health instead of healthcare."

Companies and community clubs can arrange for the bus to visit at no cost, to get their employees and residents screened.

Punggol resident Kim Tey, 47, who was screened for the first time, said she did not mind getting checked since it was free.

A housewife who wanted to be known only as Ms Khong, 46, was screened at a polyclinic about two years ago but decided to do it again since she also lives nearby.

She said: "I feel it's necessary to do (regular) checks. You'll feel safe if you know you don't have any problems, and even if you do, you can go for early treatment."