Foreign maid Rusmini is no novice when it comes to caring for the elderly. In the eight years since arriving in Singapore from Indonesia, the 37-year-old has looked after two elderly couples.

Yet, when she attended a training course on how to care for the elderly that is administered by the Agency for Integrated Care (AIC), she learnt some new skills.

"They taught me how to properly transfer her from the bed to the chair, because she cannot walk," said Ms Rusmini, who goes by one name. "They also taught me how to give her a shower, and how to dress her. Before this, I didn't always know what was considered safe or unsafe." 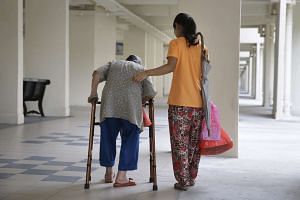 The course will be offered to more foreign maids like Ms Rusmini this year, under a new pilot programme by the Health Ministry to train them to give specialised care to seniors.

Called Eldercarer, it was announced in Parliament by Senior Minister of State for Health Amy Khor yesterday, during the debate on her ministry's budget.

She was replying to Dr Tan Wu Meng (Jurong GRC) and Ms Joan Pereira (Tanjong Pagar GRC), who had called for more care to be provided for seniors at home.

Dr Khor acknowledged that despite steps taken to make employing foreign maids more affordable, some people still find it difficult to get helpers who are experienced in caring for seniors.

Under the programme, the helpers will be trained before they start working with families.

"Trainers will go to the homes to observe the domestic helpers at work, and check that they can perform the required eldercare tasks competently," Dr Khor said.

The programme comprises four days of classroom learning and on-the-job training - similar to that attended by Ms Rusmini.

Helpers will learn techniques such as how to prevent falls, as well as soft skills such as communicating with seniors.

Those who wish to send their maids for the training can call AIC on 1800-650-6060 or visit AIC's website at https://www.silverpages.sg/

A version of this article appeared in the print edition of The Straits Times on April 14, 2016, with the headline 'Maids can get training on caring for the elderly'. Subscribe
Topics:
More
Whatsapp Linkedin FB Messenger Telegram Reddit WeChat Pinterest Print Purchase Article Copy permalink