The road to health in Singapore will start early. All pre-school children will have at least one hour of physical activity a day, including time spent in the sun.

They will also be served healthy meals that include fruit. Once a key law is passed, pre-schools will no longer be allowed to offer unhealthy eating options.

These recommendations from the NurtureSG committee to get children and youth to grow up healthy - both physically and mentally - have been accepted by the Health and Education Ministries. Some are already being rolled out.

With obesity rates among children going up and chronic diseases like diabetes and hypertension on the rise, the committee was tasked with finding ways to improve children's health. It was co-chaired by Minister of State for Health Lam Pin Min and Minister of State for Communications and Information, and Education Janil Puthucheary.

Among the issues that the committee addressed were mental health problems, eating habits, and the lack of sleep and exercise. 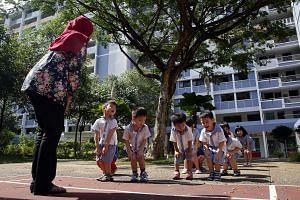 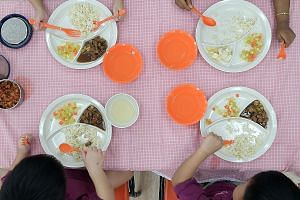 "So very often you can see young children on their handheld devices," said Dr Lam. "That has also resulted in children not exercising enough and leading a more sedentary lifestyle."

The committee decided to get the fitness ball rolling with pre-schoolers, who will have at least one hour of physical activity every day.

Schools from primary to junior college levels will be encouraged to lend out sporting equipment, like footballs, so children can have "unstructured play" during recess, after lessons, and even on weekends.

Dr Lam added that more time outdoors for the young might also reduce the high rate of myopia. By the time they finish their studies, seven in 10 children here are myopic.

He also touched on a relatively less-discussed issue. Children here do not sleep enough. Half the teens don't get the recommended eight to 10 hours of sleep while one in three sleeps less than 5-1/2 hours each night, said Dr Lam.

This affects their mental abilities, and increases their risk of obesity. Students will be offered tips on the importance of having enough sleep.

The mental health of children is also a growing concern. In particular, the committee looked at self-harming behaviour and suicide among youth.

Child psychiatrist Daniel Fung, who is in the NurtureSG committee, will chair a committee to look into factors that lead to youth suicides, which come at the tail-end of other issues. For 15 to 24-year-olds, suicides had increased from two to three per 100,000 previously to 5.9 in 2015.

Said Dr Puthucheary: "It's not about the numbers because I think every single one of them (the suicides) represents a tragedy."

Since students who are stressed do not always approach their parents and teachers for help, their peers will be roped in to look out for signs of distress and offer support.

Eat, sleep and be healthy