Transgender Singaporeans have a new avenue for help in the Institute of Mental Health (IMH).

The hospital has started services offering psychiatric treatment and psychological counselling for those with gender dysphoria.

It is believed to be the only public hospital in Singapore to have a team of medical professionals treating the transgender community, after the gender identity clinic at the National University Hospital (NUH) closed in 2008.

Gender dysphoria occurs when people identify with a gender different from the one they were born with, leading to a dissonance between the sense of self and body.

The Sunday Times understands that IMH began seeing transgender patients more than half a year ago. 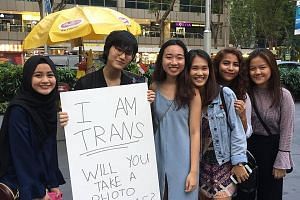 Hostile stares and friendly words on the streets

The clinic is helmed by psychiatrist Zheng Zhimin from the Department of Community Psychiatry, who also sees patients outside the transgender community.

In setting it up, Dr Zheng also consulted lesbian, gay, bisexual and transgender (LGBT) activists here on matters such as communicating with transgender people.

Patients, for instance, often seek help with family mediation, given how family members often struggle to come to terms with their condition.

When contacted, IMH declined to comment "as the service is still in its pilot stage".

The Ministry of Health did not respond to queries.

Those in the transgender community welcomed the development. Said LGBT advocate Bryan Choong: "It helps to reduce barriers in seeking help."

Before IMH offered such services, many would have sought help at private clinics, which are substantially more expensive.

There are no official figures on the number of transgender people in Singapore.

Based on international studies estimating that 1 per cent of any population identify themselves as transgender, there could be about 34,000 transgender Singaporeans.

IMH's move comes amid growing ground-up efforts to offer greater support for them.

The site, transgendersg.com, has a range of information from how to change a person's sex on legal documents here, to national service policies for transgender women, and how to safely start on hormone therapy.

Mr Joe Wong, who helped to launch the website, said they wanted to "address the severe lack of information on navigating life and transition as a transgender person in Singapore".

Information online tends to be Western-centric, he said.

Mr Wong, who transitioned 15 years ago and is also an activist with the Asia-Pacific Transgender Network, said: "Trans people here have thus had to rely on word of mouth for a long time, which often means that accessing safe, quality transition-related healthcare might depend on who you know."

Another recent development is the creation of an informal support group for transgender men called Kopitiam Brothers.

The group meets twice a month at a secret location disclosed only when interested parties send a private Facebook message to the organiser.

"We try to keep it as secretive as possible to safeguard the identities of people who are attending, so they feel safer about coming," said organiser Deveshwar Sham, 32, a transgender man who works in animal welfare.

He started it to create a space where transgender Singaporeans can ask questions and share experiences.

The group's first meeting in December drew four participants, a number he said was "pretty good". Kopitiam Brothers has since met five times.

"As with other groups with defined healthcare and psychosocial needs - such as the elderly, single parents, children with special needs or persons with mental illness - it is hoped that we will similarly extend the 'many helping hands' approach to this marginalised group of Singaporeans."