Around two weeks ago, about 65 people took photos with Ms Cassandra Thng, 20.

This happened along the shopping belt from Bugis to Orchard Road. But she is not a celebrity.

Ms Thng was raising awareness of a group of people who often face discrimination worldwide.

She was walking around on March 31 - declared the Transgender Day of Visibility - from 5.30pm to 10pm. A sign around her neck read: "I am trans. Will you take a photo with me?"

Ms Thng is a transgender woman, meaning she identifies with a gender different from the one she was born as. 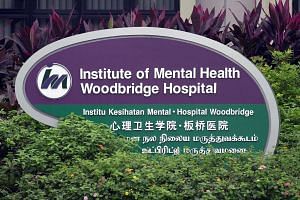 "I was visible by choice, out of the bubble that is my progressive friends," she wrote on Facebook.

She told The Sunday Times it was a scary affair at first, and she was worried about her safety.

"It sounds like paranoia, but such is the atmosphere of discrimination that surrounds us.

"We are at a much higher risk... and with me being as visibly out and attention-seeking as I was on that day, I felt like I was at an inordinately high risk."

Overseas, transgender people are regular victims of hate crimes, with 21 killed in the United States in 2015.

But while Ms Thng did receive some hostile stares, she also found support on the streets.

"The most interesting thing that night... was three Christian girls asking to say a prayer for me - and they prayed that I may have the strength to be myself, and have the labels not put on me by God to be cast off.

"I really experienced the kind of extremes that faith can bring people to that night," she said.

"I could not have asked for things to go better."

A version of this article appeared in the print edition of The Sunday Times on April 16, 2017, with the headline 'Hostile stares and friendly words on the streets'. Subscribe
Topics:
More
Whatsapp Linkedin FB Messenger Telegram Reddit WeChat Pinterest Print Purchase Article Copy permalink