For Mr Ng Soy Ah, who has lung cancer, end-of-life care is not about sitting in a room waiting to die.

The 69-year-old's weekly routine includes spending time in the St Andrew's Community Hospital garden, playing carrom with other patients, and listening to music as a respite from pain.

The activities and services that hospices provide are not limited to just relieving the symptoms of patients with cancer and other health conditions.

In Mr Ng's case, they often help with making the final days more fulfilling and meaningful.

The care that hospices provide often extends to family members as well.

For the Wong family, hospice care staff helped them cope with the life-threatening condition of a family member.

Mr Matthew Wong's brother was battling cancer and his family decided to admit him into Dover Park Hospice in January.

Mr Wong, a 47-year-old project manager who works with industrial kitchens, said he appreciated how prepared the hospice staff were for every contingency.

"When these things happen, a lot of times you don't have a clear mind to think with," he said.

"But the people (at the hospice) have so much experience. They even told us what words to say to him."

But there were initial concerns about hospice care. When his brother was admitted to the hospice, a relative told Mr Wong that there was no longer any hope.

Mr Wong, who had no idea what to expect from palliative care, kept these opinions to himself. In the subsequent months, what he saw at the hospice dispelled any misgivings that he might have had. 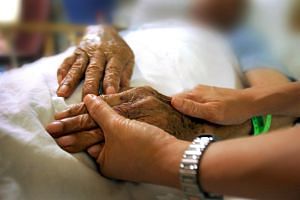 "People would think it's a terrible place, but I think it's a place for (the) family to get together to understand that time is short," he said. His brother died in March. "Even then, there is always hope."

The hospice had art therapy sessions, which Mr Wong's brother used as a medium of expressing his feelings.

In some of the earlier works, Mr Wong said, he could sense his brother's rage and frustration. But the last one was different.

"The whole drawing was in peaceful colours, and the strokes were very smooth," Mr Wong said.

"You could see that he was really at peace."