Many countries tax pre-packaged drinks with high sugar content as a way to keep their citizens from overindulging. These include Singapore's regional neighbours such as Brunei and Thailand.

Among the earliest countries to do so was Finland, which has taxed sugar-sweetened drinks since the 1940s.

The most recent is Britain, which imposed a two-tiered sugar tax in April this year. It taxes around 33 Singapore cents per litre of packaged drinks with more than 5 per cent sugar, and 44 cents when the sugar content exceeds 8 per cent.

Britain announced the tax in 2016. Since then, more than half the drinks manufacturers there reformulated their products to carry less sugar.

Thailand, which launched its tax last year, has four tiers. There is no tax on drinks which contain less than 6 per cent of sugar.

Generally, the goal of having a sugar tax is to encourage manufacturers to reformulate their drinks so that less sugar is used.

Even a small amount of tax - such as the three cents per litre on drinks with more than 8 per cent sugar in Hungary - can change people's drinking patterns.

Hungary imposed a health tax in 2011 on a range of unhealthy food, including drinks, ice cream, jams and condiments. Within two years, the sales of taxed food fell by 27 per cent.

Professor Eric Finkelstein of Duke-NUS Medical School said that taxes that raise prices by 20 per cent or more tend to have a significant effect on sales.

Professor Teo Yik Ying, dean of the Saw Swee Hock School of Public Health at National University of Singapore, said such taxes are aimed not at consumers but to incentivise the industry to reduce the sugar content to avoid the tax.

Other steps countries have taken to reduce sugar intake - and which Singapore is also considering - are to ban or restrict advertisements of unhealthy food and drinks and get manufacturers to place prominent labels to indicate whether the food is healthy or not. 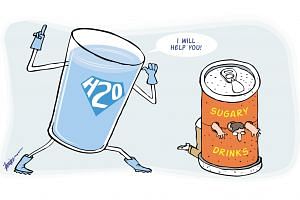 War on diabetes will have effect on 'innocent' bystanders

Some of these labels provide details of the amount of sugar, salt, fat and total calories in the product, while others use stars or traffic-light symbols to indicate if the item is healthy, neutral or unhealthy.

Prof Finkelstein said most people ignore labels. But for those who do not, they have a major impact on their purchases.

Prof Teo said the key to getting people to take less sugar is education. If people want healthier versions, manufacturers will provide them, he said. "Fundamentally, they are driven by profits and consumer choices."

People should be told the "rationale of these measures in terms of the importance for health and providing clear information on the amount of sugar in available beverages", he said.

He added that restricting advertisements of high-sugar drinks is important as these tend to appeal to children who are "less able to distinguish between factual information and advertisements".