Local researchers have discovered that a gut organism previously considered harmless may be linked to gastrointestinal diseases, including colon cancer.

A subtype of the Blastocystis organism was found to reduce good, anti-inflammatory bacteria in the gut that prevent infection and cancer, researchers from the National University of Singapore's Yong Loo Lin School of Medicine (NUS Medicine) said yesterday.

It is spread through food contaminated by faeces from infected animals, especially birds, or from humans who are already infected with the parasite.

The discovery has wider implications for people suffering from poor gut health, said Associate Professor Kevin Tan from the Department of Microbiology and Immunobiology.

"An infection with Blastocystis subtype 7 could be a recipe for long-term damage to the gut lining, possibly contributing to inflammatory bowel disease, irritable bowel syndrome, as well as gastrointestinal and colon cancers," he added.

Associate Professor Zhang Yongliang explained: "Once the gut immunity is disturbed, you will have inflammation in the colon, the gut, and inflammation is an important contributor to the development of colorectal cancer. 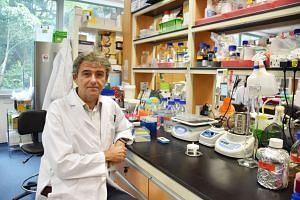 "Therefore, if you are infected by this subtype and have a disturbed gut microbiome, this will theoretically increase your chance of developing colorectal cancer."

While a study of more than 200 patients carried out 10 years ago by NUS Medicine did not find this subtype, it could still be present in people here because they are not usually tested for it, said Prof Tan, who is the lead researcher.

The subtype 7 is rare compared with other subtypes of Blastocystis, which affects more than one billion people worldwide.

The study was conducted from 2017 to last year and published online in the Microbiome journal on Monday.

Researchers conducted tests through cell cultures and on mice, both of which showed that Blastocystis subtype 7 reduced the good bacteria - Bifidobacterium and Lactobacillus - which maintain the integrity of the intestinal lining and are commonly used as probiotics to promote gut health.

Prof Tan and his team will begin a study next month to investigate the link between Blastocystis subtype 7 and inflammatory bowel disease, and gastrointestinal and colon cancers.

A version of this article appeared in the print edition of The Straits Times on March 15, 2019, with the headline ''Harmless' organism may be linked to gut woes'. Subscribe
Topics:
More
Whatsapp Linkedin FB Messenger Telegram Reddit WeChat Pinterest Print Purchase Article Copy permalink