Farrer Park Hospital (FPH) patients, especially those from overseas, can recuperate at an adjoining hotel.

FPH also aims to be a teaching hospital, and has 18 operating theatres equipped with fibre-optic connections. Operations can be broadcast live on a high-speed and stable connection to seminar rooms in the hotel, where medical students or other doctors can watch and observe the procedures. 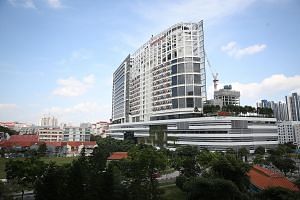 Potentially, operations and other procedures could also be broadcast to other countries, said Dr Low.

FPH was founded by a group of former Parkway Hospitals doctors and a mix of individual and corporate investors.

As with all new hospitals, it will take a while to build its capabilities. How it does will depend on what niche areas it develops, which in turn will attract doctors.

Doctors in private practice who can apply for practising privileges at private hospitals say they will look at FPH's track record before deciding whether to practise there.

Mount Elizabeth respiratory physician Ong Kian Chung said the hospital should have a high standard of care and a low number of "bad" incidents. Doctors would also seek feedback from other specialists.

"Some doctors might not want to change their existing practices because their unfamiliarity with a new hospital may affect their quality of treatment," said Dr Ong.

Gleneagles renal specialist Ng Tsun Gun said doctors who have patients in existing hospitals might not want to move.

"As with all new hospitals, it will take a while to build its capabilities. How it does will depend on what niche areas it develops, which, in turn, will attract doctors.

"At its target price point, it is clearly not looking to be in direct competition with the other private hospitals. Its location is also different from the others, and offers patients a different option."

There are eight public hospitals, as of October. In total, Singapore has 26 hospitals and speciality centres.