SINGAPORE- Reach out for the olive or avocado oil, and minimise consumption of butter and margerine.

Local researchers are issuing the recommendation, following the latest studies that show that prolonged consumption of foods high in saturated fat can lead to inflammation bowel disorder (IBD) and subsequently increase the risk of having colon tumours.

The disease can cause diarrhoea, abdominal pain, weight loss, blood in stools and fever.

Researchers from Nanyang Technological University (NTU) wrote about how they discovered that foods high in saturated fat contribute to gut inflammation and the insidious harms of trans fat on health in two recently published studies.

The first study is a two-year joint project between NTU and the Karolinska Institutet (KI) in Sweden as part of Ms Terri Phua's Joint PhD Programme. 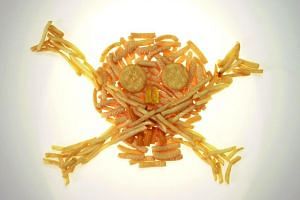 The findings affirm the conventional wisdom that consumption of wholesome foods with less saturated fat and high probiotic content, usually found in fermented foods like yogurt and kimchi, is beneficial for the gut. Such foods contain beneficial bacterial that form a protective lining along the gut.

Trans fat, on the other hand, has more insidious harms.

In a related study, NTU partnered up with Wageningen University in the Netherlands, to research on the effects of trans fat on gut health.

The recently published study showed that trans fat also lowered the ANGPLT4 levels, but it does not result in gut inflammation. However, prolonged consumption of high amounts of trans fat may lead to the hardening and narrowing of arteries. This increases the risk of getting cardiovascular diseases such as high blood pressure and stroke.

"In short, people should eat foods that are high in unsaturated fats, like avocado and olive oil, while avoiding foods containing high amounts of saturated fat and trans fat like butter and margarine respectively," Dr Tan added.

Moving forward, the team is expanding their research to find out methods for early detection of cardiovascular diseases and reduce gut inflammation.

The studies are funded by NTU iFood research Grant and the Ministry of Education; and were supported by both NTU-KI and Nanyang President's Graduate Scholarship.