The best way to build a healthy society is to inculcate good health habits in the young. The NurtureSG committee has identified four areas to focus on.

At least half of the teenagers here do not get the eight to 10 hours of sleep they need, with one in three getting less than 5-1/2 hours a night.

A committee tasked with inculcating healthy habits in the young said a child who does not get enough sleep could have deficits in memory and thinking skills, and be prone to obesity and mental health problems such as irritability, moodiness, depression and anxiety.

The Education Ministry will have the job of imparting to schoolchildren, as part of the physical education curriculum, the importance of sleep and how to get enough of it.

Asked if the early start time for school is why children do not get enough sleep, Minister of State for Health Lam Pin Min said starting school later might just mean that they go to sleep later.

Instead, young people need to know the importance of sleep and develop good sleep habits. 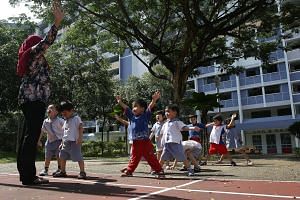 The Minister of State for Education, Dr Janil Puthucheary, said it is important that children do not use their electronic devices just before bedtime. "The idea is that we should look at gaming, social media and so forth, and do them at appropriate times of the day in appropriate amounts of time," he said.

Dr Lam said there are no figures on sleep for younger children here, "so moving forward, we are... trying to track the sleep duration of our younger cohorts".

Pre-school children should ideally get 10 to 13 hours, and six-year- olds to 13-year-olds, nine to 11 hours of sleep a night.

Health Promotion Board chief executive Zee Yoong Kang said the HPB will raise awareness so parents can help their children learn good sleep habits such as having a regular and relaxing bedtime routine.

A version of this article appeared in the print edition of The Straits Times on February 24, 2017, with the headline 'Eat, sleep and be healthy '. Subscribe
Topics:
More
Whatsapp Linkedin FB Messenger Telegram Reddit WeChat Pinterest Print Purchase Article Copy permalink