Ms Samantha Ng, 41, was two months pregnant with her first child in 2012 when she developed a blood clot in her left leg.

"When I woke up one morning, my left thigh was very painful," said the secretary.

"After the third day, it became more painful and it was swollen. My leg felt a bit warm and hard. When I pressed it, it felt like a stone."

Not realising that it was a blood clot, she chose to ignore the pain until it got to the point where she could not walk properly.

She had to borrow a wheelchair from her neighbour just to go to the general practitioner (GP) nearby.

But the GP could not figure out the problem. A visit to a traditional Chinese medicine practitioner also led nowhere.

It was at the accident and emergency department at KK Women's and Children's Hospital that a doctor treated her for deep vein thrombosis, or DVT, which is a blood clot that develops within a deep vein, usually in the leg.

If the clot travels to the lungs and becomes lodged there, it becomes pulmonary embolism (PE), and is exceedingly dangerous if left alone.

"Left untreated, more than 50 per cent of the patients with DVT will get PE," said Dr Yap Eng Soo, a consultant at the haematology division of the department of haematology-oncology at the National University Cancer Institute, Singapore.

And one-quarter of the patients who show symptoms of PE could die within 14 days, if they are not treated. DVT and PE are known together as venous thromboembolism (VTE).

To prevent new clots from forming, Ms Ng had to inject herself with a blood thinning medication twice a day for the rest of her pregnancy and one month after she gave birth.

But, she added: "Young and healthy mothers should not be allowed to die from something that is preventable and curable."

These three risk factors all lead to a rise in oestrogen. This pushes up the concentration of clotting proteins in the blood, thereby increasing the tendency for the blood to clot, said Dr Yap.

It is not just pregnant women who are at risk. Out of 100,000 patients who are hospitalised in Singapore, around 100 are estimated to have developed VTE as a result of hospitalisation, said Dr Yap.

There is a lack of data here but doctors believe VTE diagnoses are on the rise because of greater awareness among health professionals, so the number is likely to be higher than what is currently reported, said Dr Yap.

Overall, however, a belief that VTE is rarer than it is means doctors are less likely to spot it. Furthermore, the disorder can sometimes produce no symptoms, making it hard to diagnose, said Dr Yap.

If present, symptoms include pain or swelling of the lower limbs, which can also occur in many other conditions.

Nevertheless, patients should see a doctor for symptoms of unexplained lower-limb swelling, redness and pain or unexplained breathlessness, a fast heart rate and chest discomfort and pain, said Prof Lee, who is also chairman of the Asian-Pacific Society on Thrombosis and Haemostasis. "Although the symptoms are non-specific, they can be that of VTE."

The risk is higher for people who have had recent surgery, an extended period of being immobilised or an underlying cancer, she said.

She also urged doctors to be alert to how these symptoms could point to a diagnosis of VTE, especially in someone who has the right risk factors. 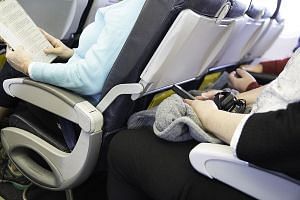 'Economy class syndrome' is a misnomer

In the US and United Kingdom, VTE is also the leading cause of premature death and disability among hospital patients, he said.

Being immobile for long periods of time is one of the most common risk factors for VTE, due to the slowing of the blood flow in the veins.

And while DVT has been associated with long-haul flights, Dr Yap said this is actually rare.

"Worldwide, only 30 out of one million passengers who take long-haul flights of more than four to six hours will get VTE," he said.

"Hospitalisation is a bigger risk because you are ill and tend to not move around as much as you normally would."

Prof Lee believes Singapore will see more people with VTE, given an ageing population with more illnesses that require hospitalisation and prolonged bed rest, and more people having surgery, cancer and cancer treatment.

Cancer can be associated with abnormal blood clotting due to the release of certain substances in the body that stimulate the clotting process, she said. Some cancer treatments can also stimulate the process, which increases the risk of clots developing, she said.

For Ms Ng, her DVT recurred after a year, and required treatment. "In 2014, it came back again all of a sudden. My leg was swollen and I was breathless," she said.

Her risk was higher as she had DVT before. People with family members who have had DVT are also at a higher risk.

Thankfully, VTE can be prevented and treated with medication or lifestyle modifications.

Medication such as blood thinners can be used if you are hospitalised. Alternative methods such as mechanical calf pumps can also be used in place of medication, said Dr Yap.

And lifestyle changes such as losing weight, quitting smoking and getting regular exercise will lower the risks of blood clots, he said.